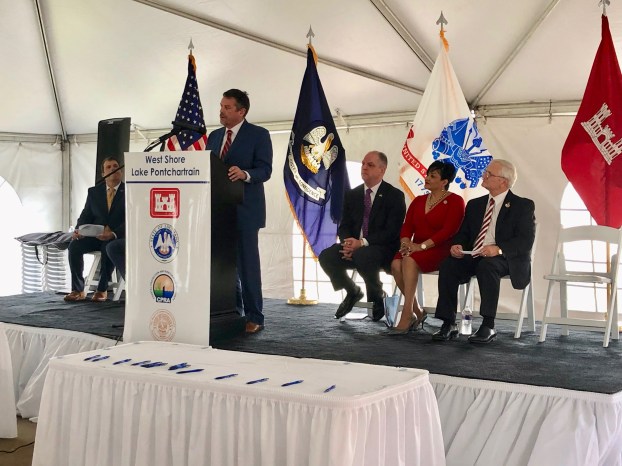 “The Coastal Master Plan called for this large-scale hurricane protection project, and now that we have the funding we’re wasting no time in moving it forward,” said Gov. John Bel Edwards. “We have 60,000 people who will benefit by having their homes, families, jobs and communities better protected from the increasing threat of tropical storm surge. Hurricane Isaac flooded about 7,000 homes in this region, and emergency services, recovery efforts and commerce were hindered by having I-10 flooded for several days. Once this $760 million project is completed, we hope never to see that kind of suffering again.”

The West Shore Lake Pontchartrain project was authorized by Congress in 2016 to provide a 100-year level of storm surge risk reduction in the three parish study area, including communities such as LaPlace, Gramercy, Lutcher, Grand Point and Garyville.

The approximately $760 million project will include structural features such as a 17.5 mile levee and four pump stations, as well as non-structural measures in St. James Parish. Construction of the project is being funded through a 65 percent federal, 35 percent local cost share.

“The importance of this project is underscored by Congress’ decision to provide upfront funding through the Bipartisan Budget Act of 2018,” said Col. Michael Clancy, commander, New Orleans District, USACE. “The federal, state and local partners’ shared commitment will ensure that all the necessary resources can be leveraged to provide the people of St. Charles, St. James and St. John parishes with an unprecedented level of risk reduction.”

The Bipartisan Budget Act of 2018 was signed into law Feb.9, 2018. The act provides funding that will be used by the New Orleans District for projects in southeast Louisiana such as the Carrolton Floodwall, Comite River Diversion, and East Baton Rouge, Grand Isle and West Shore Lake Pontchartrain flood risk reduction projects.

Funds will also be used for repairs to the Mississippi River and Tributaries and for five studies.

Work on WSLP began in June with the development of the project alignment, request for rights-of-entry for field investigations, and updating of the necessary environmental documents.

Now that the project partnership has been executed, work can begin on collecting field data that will be used to determine the final levee alignment and to complete detailed designs of the project.

Construction of the system is expected to be complete in spring 2024.

“Once completed, thousands of residents and millions of dollars of residential and commercial property will be protected and the community better prepared for hurricane season,” Robottom said. “I would like to thank the Governor’s Office, US Army Corps of Engineers, our Congressional delegation and the Pontchartrain Levee District for their tireless work on this project. The number one priority of my Administration is to ensure this project is completed and today’s signing ceremony brings us one step closer to fulfilling my commitment.”

Pratt: Seniors, be aware of “silent killer” – heart disease is No. 1 killer of men & women

Although the statistics are scary when it comes to hypertension (high blood pressure), the symptoms are usually not. Because, they... read more