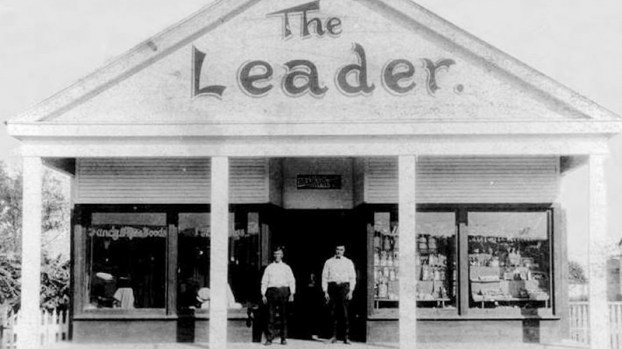 Alex Haik and Tewfik Haik are seen in front of The Leader in Reserve. The store was later known as Haik’s Store.

RESERVE — The boarded-up Haik’s Store in Reserve will open to the public for the first time in decades this April when it moves down River Road into the parking lot of the historic Godchaux Grammar School.

Remembered as an integral part of community life from the late 1920s through 1980, Haik’s Store will ultimately function as a gift shop and visitor’s center for the neighboring Godchaux-Reserve House.

The Godchaux-Reserve Historical Society has worked tirelessly since 2014 to restore the house’s exterior to its former glory, with plans to implement a Godchaux sugar museum and tourist complex once interior renovations are complete.

To help defray costs for the $350,000 restoration, a Denim and Diamonds fundraiser starts at 6:30 p.m. March 16 at Petra Restaurant and Lounge, located at 1036 W. Airline Highway in LaPlace.

Dress code is casual or formal, and tickets can be purchased at godchauxhouse.com or at Petra for $50 per person.

Acquisition of the Godchaux Grammar parking lot and relocation of Haik’s Store facilitates phase II of the restoration, expected to reach completion in 2021, according to Historical Society president Stephen Guidry.

Haik’s Store will be moved west down River Road to serve as part of the Godchaux-Reserve House restoration project.

Generations of Reserve residents remember Haik’s Store as it existed for decades, divided into two halves with separate inventories and two cash registers.

The store, operated by two Reserve couples, was a popular dry goods shop offering fabric and clothing for men, women and children.

Brothers Alex Haik and Tewfik Haik grew up in Lebanon and married a pair of sisters before immigrating overseas to settle in the growing town of Reserve.

The couples opened the store, originally known as The Leader, on River Road and resided directly behind the business. Ownership was handed down through the years to Alex’s granddaughters, Courtney P. Millet and Susan P. Campbell.

According to Millet, the duo recently donated the building to the Godchaux-Reserve Historical Society to keep their grandparents’ giving spirit alive.

“To preserve the store is to preserve and commemorate a way of life and a symbol of our history,” Millet said.

Godchaux-Reserve House Historical Society announced they are relocating Reserve’s iconic Haik’s Store next to their refurbishment project at the corner of River Road and West Tenth Street in Reserve.

“Susan and I, as well as all my cousins, are thankful and wish this history to be a part of the Reserve Historical Society’s collection.”

Millet said her grandparents are remembered fondly as good community neighbors who helped customers in a pinch by allowing them to purchase items on credit.

“Their hard work was an extension of what they were passionate about, which was becoming part of their community and selling goods to people from all walks of life in order to provide for their own three children,” Millet said.

That simpler way of life is what Guidry hopes to preserve. He’s consulting with an engineer this spring to schedule interior renovations and landscaping around the Godchaux-Reserve House.

Stephen Guidry and Julia Remondet talk about the Godchaux-Reserve house.

“This project is about more than just this house,” Guidry said. “It’s about Reserve and St. John the Baptist Parish. We have so much history here that has been lost.”

She encourages the residents looking for deeper connections to their community to attend Denim and Diamonds on March 16.

“If you want to feel part of something, this is it,” Remondet said. “By coming to an event to eat, drink and dance to beautiful music, you’re contributing to this project to recreate our community.”

LAPLACE — Keiara Neal of LaPlace felt lost at Southern University at New Orleans as she rotated between majors with... read more