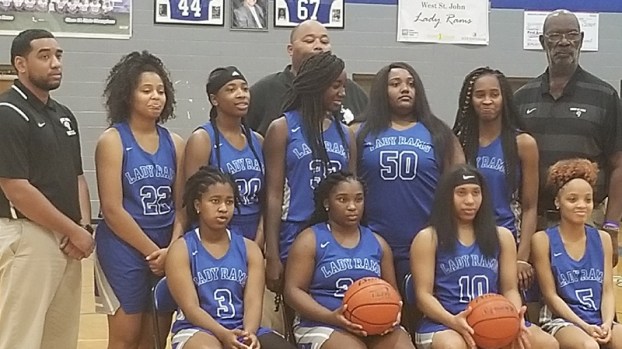 It wasn’t an unexpected outcome for the quick and confident Lady Rams, who completely turned around their luck from last year’s losses to finish the regular season 26-7 and earn a No. 7 playoff seeding.

Coach Lester Smith said the girls had three goals since the season’s start: win district, maintain a winning record and advance in the playoffs.

Though West St. John did not come out on top in district, Smith is confident the Lady Rams can achieve their final goal with the same momentum seen in Thursday’s game.

“We had good energy,” Smith said. “We turned the ball over about nine times in the first half, and we were able to capitalize and score points on it. We never stopped once we got the lead. We had senior Stevante Hamilton with 19 points in the first half compared to Cameron’s 15 points, so she outscored the whole team in the first half.”

The girls were all smiles after the game, high on the win, but Smith said it didn’t take long for them to come back to ground level.

“Winning is part of it, but it wasn’t our ultimate goal,” Smith said.

The Lady Rams host No. 10 seed Grand Lake at 6:30 p.m. Monday in Edgard, and Smith is expecting a battle.

“It’s going to be a good game,” Smith said. “They’ve got a lot of 3-point shooters, and they shoot it well. It will be up to our defense to corral the 3-point shots.”