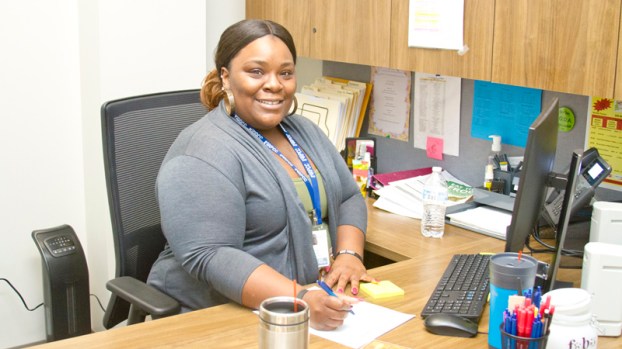 LAPLACE — Keiara Neal of LaPlace felt lost at Southern University at New Orleans as she rotated between majors with a financial aid situation as uncertain as her future plans.

Neal graduated from East St. John High in 2010 and jumped into a traditional four-year college path, expecting to pursue social work. The spark of passion never came, and she felt more drained than enthusiastic about the future when she switched to psychology and then early childhood development.

When she was advised her financial aid would run out before graduation, Neal stepped back to figure out what she wanted from life.

Today, Neal is the College and Career Transition Advisor for River Parishes Community College – Reserve campus, where she earned her degree in business administration in December 2017.

After her daughter graduated from high school, Johnson felt it was her time to pursue a new path.

“At the time, I was working at a daycare facility, and I wanted to further my education and get into business,” Johnson said. “I started volunteering here because I loved it so much. After volunteering for a year, they hired me as a student worker first. Before I graduated, they hired me full time.”

Rosie Johnson, left, found purpose and a career when going back to school with classes at River Parishes Community College – Reserve campus. The effort was contagious, as daughter Keiara Neal, right, followed suit, to equal success.

Seeing her mother thrive at Reserve’s college campus gave Neal hope, and the real push to go back to school came after she gave birth to her daughter three years ago.

“I had a baby, and when I was holding this tiny human, I told myself it was time to get it together with higher education,” Neal said. “I came over to the vo-tech, and they understood that life happens. From day one, all of the instructors worked with me to make sure I understood the material and that I was successful.”

Johnson said she enjoys working alongside her daughter on campus.

“I’m very proud of her,” Johnson said. “You can see she’s grown very professionally. You can see the one-on-one sessions she had with her instructors helped her a lot.”

Neal was drawn to business with dreams to open a catering company, furthering her years of experience catering events for churches in the New Orleans region.

Within a semester of Neal starting school, her significant other was inspired to continue his education.

Albert Watson saw doors of possibility open for Neal as she earned membership in Phi Kappa Theta Society and the National Honors Technical Society. Campus staff worked with her to ensure employment before and after graduation.

“He got a little bit jealous,” Neal joked.

Albert Watson enrolled in the Industrial Maintenance and Millwright program and obtained full time employment with Bayou Steel in LaPlace soon after his May 2018 graduation.

Watson and Neal are now engaged and plan to marry this year.

Neal plans to pursue St. John the Baptist Parish’s Fast Trac program for aspiring business owners. After the wedding, she and Watson will set the catering business in motion.

Until then, Neal is busy coordinating industrial maintenance, welding, AC and electrical programs at RPCC while keeping students on track for graduation.

Over the past year, she’s taught a class, administered testing and contributed to a new program to give work force opportunities to special needs high school seniors.

“It’s important to stay committed. If you sit out a semester, it’s going to turn into two years. Just keep going and keep the line of communication open with instructors.”