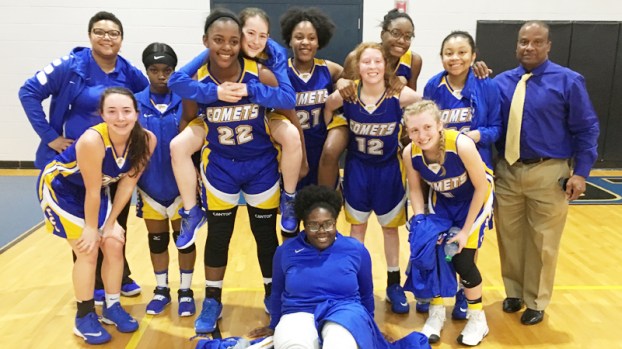 St. Charles Catholic advances to the regional round for a 6 p.m. Monday game at No. 4 seed Ursuline Academy.

LAPLACE — Thursday’s bi-district playoff win against David Thibodaux left the St. Charles Catholic Lady Comets crying tears of joy, jumping into bear hugs and swirling each other around on the court.

The final buzzer signaled a 55-47 win and ignited a celebration within a team that was beginning to grow weary with self-doubt, according to coach Brandi Adams.

With a 5-19 season record, the Lady Comets came into the game as a No. 20 seed fighting against No. 13 seed David Thibodaux. The odds were stacked against them, but the girls proved they are not to be underestimated.

“It was a good win for them,” Adams said. “They’ve been through so many losses, I think they were beginning to doubt themselves and their abilities. It was definitely an eye-opener for them. They were so excited, they couldn’t slow the ball down at the end of the game.”

St. Charles Catholic took an early lead in a fast-paced first half packed with turnovers on both sides.

St. Charles Catholic advances to the regional round for a 6 p.m. Monday game at No. 4 seed Ursuline Academy.

Previous games against Ursuline Academy this season ended in 44-57 and 40-43 losses for the Lady Comets, but Adams said her team has improved enough to beat the odds.

“I’m anticipating a win,” Adams said. “I think the third time’s a charm. We’re playing the same team, and the deficit keeps getting smaller. We’re familiar with their players, and we’re going to make a game plan and play accordingly.”

RESERVE — The No. 14 seed Riverside Academy girls basketball team earned a bye this week and is preparing for a 6 p.m. Monday game against No. 3 seed St. Katharine Drexel at Eleanor McMain Secondary School in New Orleans.