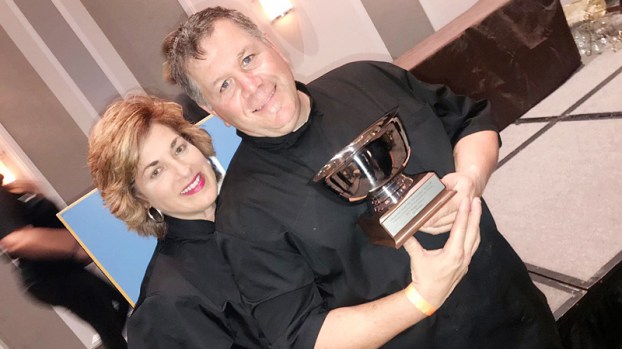 Bec’s at the Lake Restaurant and Catering co-owners Denise Pritchard and George Becnel are seen at the 19th annual Got Gumbo competition hosted by United Way of Southeast Louisiana at Royal Sonesta New Orleans.

LAPLACE — In a competition of extravagant desserts from five-star hotels and New Orleans restaurants, the People’s Choice Award went to the apple praline cobbler from Bec’s at the Lake Restaurant and Catering in LaPlace.

The dessert competition, which featured tastings from approximately 400 guests, was part of the 19th annual Got Gumbo competition hosted by United Way of Southeast Louisiana last week at Royal Sonesta New Orleans.

It was Bec’s at the Lake owner George Becnel’s first time entering a cooking competition.

After the tastings, a group of people gathered around Becnel’s booth in anticipation of the results.

“The cool part was there were people standing around the booth at the end to see if we won,” Becnel said. “They were saying if we didn’t win, it was rigged.

Bec’s at the Lake Restaurant and Catering won People’s Choice for its apple praline cobbler.

“There were beautiful desserts I can’t even explain, beautifully stacked mousses and gorgeous chocolates, but at the end of the day, folks just wanted some good eating.”

Becnel said it’s pleasing to know his apple cobbler stood out against some of the biggest and best dishes from top chefs in the New Orleans region.

Bec’s at the Lake also entered the gumbo competition, which featured a category of exotic ingredients.

Since opening at the end of Peavine Road in LaPlace in late 2017, Bec’s at the Lake has grown into a successful restaurant known for mouthwatering seafood, live music and a family friendly atmosphere.

“Business has been absolutely amazing and humbling,” Becnel said. “I didn’t expect the friendships you build. It’s been one heck of a ride. It’s a lot of hours, a lot of work, but it’s been rewarding.”

Crawfish boils start this weekend at Bec’s at the Lake, and live music rocks the downstairs dock Friday and Saturday nights.