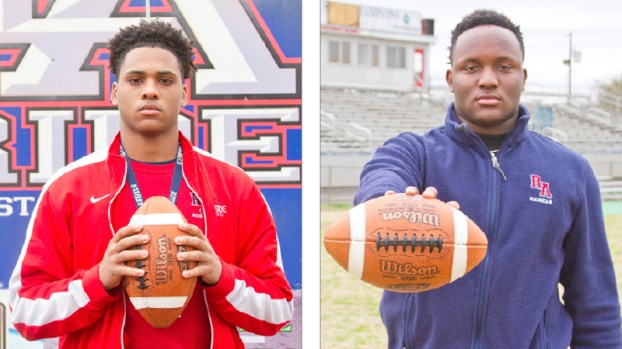 Kash Foley, left, is headed to Grambling State because he felt at home surrounded by Grambling’s rich football history. Louis Cheneau Jr. committed to Louisiana College to continue his football career in an environment where peers already know his name. Off of the field, Cheneau is excited to pursue a career in criminal justice.

RESERVE — Kash Foley and Louis Cheneau Jr. have played football together since they were children discovering a love for the sport on the recreational St. John Parish Heat youth football team.

They helped lead the Riverside Academy Rebels for the past four years, making two championship game appearances in the Superdome in their freshman and sophomore years.

The duo will strap on college jerseys next season when Foley takes his football talent to Grambling State University and Cheneau continues his athletic career at Louisiana College.

Foley had a lot to consider as he headed into signing day last week with a myriad of offers from Kentucky, Kansas, Arkansas State, Southern, Southeastern, Southern Mississippi, Western Kentucky and Nicholls State.

An opportunity from Grambling State came in at the last minute and drove the course of Foley’s future once he took a campus tour in late January.

“When I went on my official visit, the team made it feel like I was at home,” Foley said. “There’s so much history about that place, too. They have put 200-plus players in the league, and coach Eddie Robinson had the most college wins in college football.”

Foley wants coaches to know he can compete at the next level and is willing to do whatever it takes to improve his game.

“I’m a hardworking dude,” Foley said. “I will be at practice every single day, any time of the day. I will give it 100 percent to get better at what I’m going. I just want people to know my name.”

Off the field, Foley plans to study business or biology.

Foley, the son of Kiandre Bardell and Floyd Foley, was named an all-district, all-metro and all-state for his performance at slot receiver.

He’s a dual sport athlete in basketball and track who consistently gives it his all, according to Rebels coach Kevin Dizer.

“Kash’s recruitment process has been a little different, but I think he’s found a home somewhere he’s comfortable and where he can be himself,” Dizer said.

Foley and Cheneau were accountable and present for each practice, Dizer said, adding their hard work set a good example for younger players coming up in the program.

“I’m looking forward to them being 18-year-olds and getting an opportunity to play football, get an education and grow up as men,” Dizer said.

He described Cheneau as a “tough running back who works real hard” and is a good asset to anybody’s program.

“I think Louisiana College is a place where he can find himself on the field and take advantage of this opportunity moving forward,” Dizer said.

Cheneau, the son of Bernadette Cheneau and Louis Cheneau Sr. of LaPlace, was offered preferred walk-on status at Southeastern Louisiana University, Nicholls State University and Southern University before he committed to Louisiana College.

Louisiana College coach Justin Charles has worked to recruit Cheneau for the past year.

“When I went there on an official visit, they opened up with a prayer,” Cheneau said. “It being a Christian school was the main thing for me.

“As Coach Charles was talking, everybody knew who I was already. I didn’t have to introduce myself or anything. It felt like it was home.”

Cheneau’s goal is to build a legacy by fighting for his spot on the football field.

He also plans to study criminal justice, a field he’s been passionate about since striking up a friendship with former New Orleans police chief Michael Harrison.

He competes on Riverside’s track and field program in the 100m, 200m and relay events.