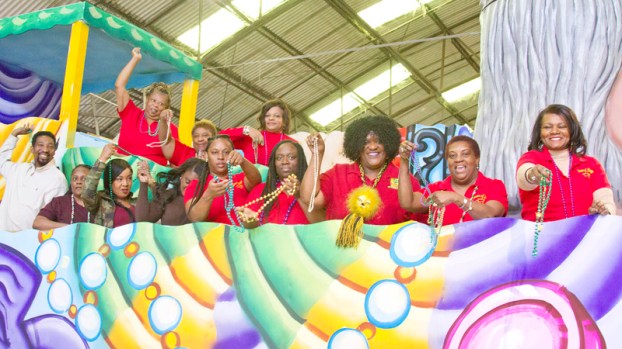 LAPLACE — Krewe of Dagé starts off with a bang March 3 with an inaugural roll that includes 36 double-decker floats, a dozen dance teams, pageant queens and music from local marching bands.

Krewe of Dagé president Jean Stewart said planning started in late summer 2018, when a spirited group of women convened to add a second parade to LaPlace.

Residents set up camp along the route with food, family and the anticipation of full hearts and full bags of Mardi Gras throws, but the fun is over far too soon, according to Stewart.

“Lets do something to get out there and make it a little longer,” Stewart said. “It’s still community; still family-oriented for kids. We want people to have a good time in LaPlace because a lot of people don’t go out to New Orleans for the parades. This might be their only parade, so let’s make it nice and longer so everyone can enjoy it.”

Initially expected to make its parade debut in 2020, Krewe of Dagé became a reality sooner than expected with help from zealous board members and an outpour of community participation.

Board member Brannetter James said the group hoped to secure 20 floats for the first year.

That number was quickly exceeded months before the parade, and registration was closed once participation reached full capacity.

Krewe of Dagé will contain more than 60 units between floats and marching groups. James and St. John Parish Assessor Lucien Gauff III will be featured as grand marshals, and the parade’s theme is “Krewe of Dagé travels the world.”

“We can’t take anymore (participants) because we would be out there all night,” James said. “We have people participating from Donaldsonville and Slidell. The main focus is to have a family-oriented parade and have a safe parade.”

James said Sheriff Mike Tregre and Emergency Preparedness Interim Director Travis Perrilloux have been helpful in planning safety monitors, who will be placed strategically throughout the parade route.

Jean Stewart and Michelle Watkins are ready for Krewe of Dagé, which rolls for the first time in LaPlace on March 3.

Board members share a common goal to make Krewe of Dagé special to St. John the Baptist Parish children on and off the parade route.

Dagé is a Nigerian word meaning, “to take a firm stand,” and Stewart said that is exactly what board members plan to do through educational scholarships.

“Education leads to a brighter future,” Stewart said. “If you give back and help kids, and they see you have an education and have achieved, they’re more in line to follow in their footsteps. They’ll see a lot of people are interested in helping and guiding.”

Krewe of Dagé is still accepting entries for a 150-word essay contest open to fifth through eighth graders in local schools. The topic is “What Mardi Gras means to me,” and the winner will have a reserved spot on one of the floats.

“I can’t tell you how excited we are,” Stewart said, adding Krewe of Dagé organizers plan to create a scholarship after the parade rolls and present it to a deserving high school student before graduation.

For more information, visit Krewe of Dagé on Facebook.