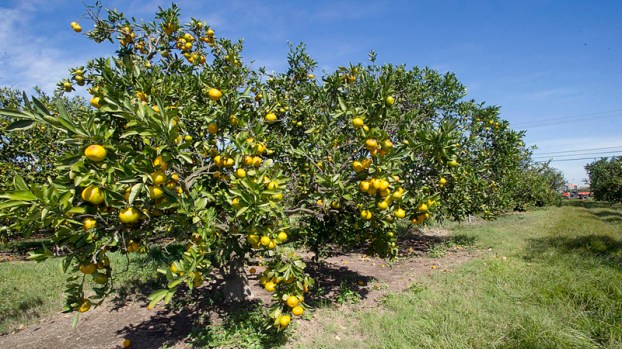 Citrus represents probably our most popular yard fruits in the River Parishes.

Well we’ve recently celebrated Groundhog’s Day and with all the hustle and bustle, who among us has remembered the true spirit of the holiday?

That’s right; Punxsutawney Phil predicted an early spring. And if you can’t trust a flabby-skinned East Coast rodent held aloft by men in top hats, who can you trust?

Despite a “cool but not cold” winter overall, I wouldn’t suggest planting okra yet. But local nurseries and big box stores alike have fruit trees for sale.

November through February is generally the best time to plant trees and shrubs. But now is when we’ll start seeing better retail selection in species and varieties.

Citrus represent probably our most popular yard fruits in the River Parishes. Freezes do occasionally kill them, but they are generally low-maintenance for the homeowner.

Pollination is not necessary for any citrus, and satsumas will usually make few or no seeds if not pollinated.

Satsumas are also among the most cold-hardy citrus, second only to kumquats. Lemons and limes are the most cold-susceptible; oranges are somewhere between. ‘Louisiana Sweet’ and ‘Washington Navel’ are both good oranges for backyards here.

I think the ‘Moro Blood Orange’ is underrated, though. It’s very vigorous, retains a pleasing form, and produces excellent red-stained fruit that gets redder as it ripens.

When planting any fruit tree, first remove any fruit already on the tree. For its first year or two, we want all the tree’s energy going into its own vegetative growth.

Fruit production is a big strain on any tree. No further pruning is usually needed at the time of planting, but always be on the lookout to remove any growth coming from below the graft. The “graft union” is visible as a scar usually a few inches above the soil line.

Above this line is a desirable citrus fruit; below it is the rootstock, a native tree used to make a hardier plant.

If allowed to grow, the native will make a thorny plant with bitter fruit.

Dig a hole for the tree about twice as wide as the root ball but you won’t need it too deep. Plant any tree only as deep as the original soil line in the pot, or maybe an inch or two higher.

Speaking of which, you might mound up the area around it, especially if it’s a low area. Citrus do not tolerate “wet feet.” Do not put any fertilizer in the hole at the time of planting. Let trees establish for at least a year before fertilizing so their roots won’t be further stressed.

Many homeowners have citrus trees on their property that would benefit from better care. The easiest and most important thing you can do to improve citrus is to keep all weeds (including lawn grass) off the ground around the tree, at least out to the “drip line.”

This area under the edges of the branches, plus a little beyond, is where most feeder roots are.

You’ll also want to apply about a pound of 13-13-13 fertilizer PER YEAR of tree age here in early February to fuel spring growth.

But do not put more than ten pounds total, even on older trees.

If you want to know more about gardening, landscaping or anything else horticultural, contact the St. John, St. James and St. Charles Parishes County Agent André Brock at abrock@agcenter.lsu.edu. Also, the LSU Ag Center’s website can be accessed at lsuagcenter.com with lots of user-friendly information, including this article.

I remember seeing the actor Don Adams as Agent Maxwell Smart (aka Agent 86) on the series “Get Smart” when... read more