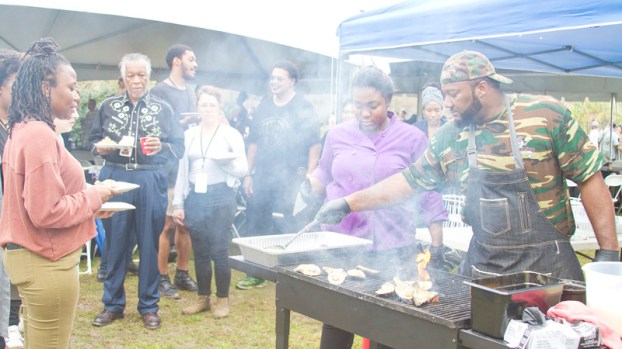 That changed Tuesday afternoon when the PBS “Nourish” host and Food Network guest star served dishes at Whitney Plantation in Wallace during a seminar aimed to illuminate roadblocks to diversity in the food and beverage industry.

Conyers, a South Carolina native, honored his enslaved ancestors and recognized progress made in the generations since.

“I made a decision to not cook in the back of the house,” Conyers said. “My people worked too hard for me to be where I am for me to be able to do that. I wanted to give everyone a meal I thought was full-circle.”

A crowd of more than 100 people, black and white, united to enjoy a celebratory meal of herb smoked chicken, ribs, sausage, chargrilled oysters and seasoned vegetables.

The seminar, known as “Resistance Served,” was part of a two-day tour by New Orleans-based hospitality group Radical XChange.

Founders Ashtin Berry and Kisira Hill started the group in 2018 to promote inclusion and recognition of people of color in the modern workplace.

Berry spoke on the lasting impact of slavery.

“A lot of people don’t realize the domestic work scene on plantations actually has translated to how we see work being done within the hospitality industry,” Berry said. “Specifically in restaurants and bars, you see people of color in certain positions where you don’t see anybody else.”

Berry invited Conyers to “Resistance Served” to allow a descendent of slavery to reclaim his ancestors’ history in an empowering way.

“He’s cooking here in a way that allows him to own the energy,” Berry said. “I think events like this educate people. Giving them access to this information is the first step to acknowledging the power structures and the systemic kind of oppression that exists in our everyday lives that they may have missed.”

Whitney Plantation Director of Operations Yvonne Holden accompanied Berry and listened as guests recounted their thoughts on the tour.

One guest was moved to see enslaved populations had an almost spiritual connection to nature.

“In our culture, you’re a hippie or you’re acting like a white person if you eat organic food or if you care about the environment,” the guest said.

“We’ve forgotten about that part of ourselves. I think it’s important to remember that we’ve always been super connected to the land, the soil and the plants.”

Holden said other traditions, positive and negative, have carried through the generations. She recalled children at grandparents’ homes getting whipped with extension cords, a punishment handed down from slavery.

Joy Banner, director of communications for Whitney Plantation, said Black History Month is a study of American history as a result of significant African American contributions to society.

“Black American history is incredibly rich, complex and interesting,” Banner said. “Learning these stories of ingenuity, persistence and resourcefulness can foster inspiration in anyone, no matter the race.”

On Feb. 24, there will be a 2 p.m. blessing ceremony of the Whitney Plantation grounds featuring prayer, African drumming and light refreshments.

Whitney Plantation is the only plantation museum with an exclusive focus on documenting the lives of the enslaved. Guided tours of the grounds are offered daily Monday through Sunday (except Tuesdays).