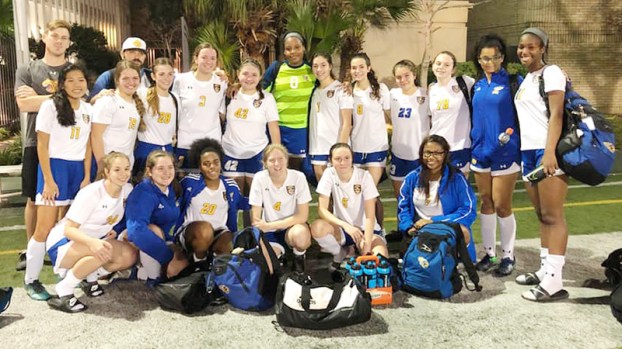 NEW ORLEANS — History repeated itself Wednesday night when the St. Charles Catholic Lady Comets, hungry for redemption, lost to Isidore Newman in the regional round of the girls soccer playoffs for the second consecutive year.

The scoreboard read 6-1 at the end of the night, ending a soccer season that faced a rocky start before picking up speed.

The Lady Comets, seeded No. 9, knew No. 8 seed Newman to be a competitive opponent with few weaknesses. SCC coach Travis Trepagnier said the first half was, for the most part, a “good, hard-fought battle” in the midfield between the two teams.

Ball possession swapped back and forth, but two errors by the Lady Comets helped Newman snatch a lead.

“The two goals they had in the first half weren’t really earned; we just faltered,” Trepagnier said. “We let a ball roll right past our defense, and nobody took charge to clear it out. We had another sky ball in the air, and we kind of let it bounce right in front of our goal.”

St. Charles Catholic missed its first goal attempt before senior Eden Simoneaux kicked in the only SCC score of the night.

The Lady Comets convened between halves with a plan to protect players uncovered in the first half.

Emily Giammolva, left, and Eden Simoneaux pose together during a team celebration last week as St. Charles Catholic prepared to take on the 2019 girls soccer playoffs. The season ended Wednesday with a 6-1 loss against Isidore Newman in the regional playoff round. (Photo submitted)

“We were down 2-1, and we couldn’t ask for a better situation to be in going into the second half,” Trepagnier said.

Unfortunately, the Lady Comets’ fighting chance slipped away within the next 10 minutes of gameplay, and Newman moved in with four rapid-fire goals.

“We just couldn’t recover after that,” Trepagnier said. “We never saw that end of the field for the rest of the game. We broke down mentally. Newman hustled to the ball and won most of the 50/50 balls. We gave them plenty of windows to control the game, and that’s what they did. Once we let them get their tempo in the second half, there was nothing we could do.”

Trepagnier plans to expand off-season conditioning in the next year to help the Lady Comets surpass the regional round hurdle.

Despite the loss, the team ended the season on a positive note, knowing they fought for every win and never gave up.

Trepagnier has described Simoneaux as a “definite next level player” and a consistent top scorer, even as she fought off minor injuries.

The future of the team is in good hands with juniors Anna Guidry, Colette Rainey, Kirstin Smith and Valerie Perilloux, along with sophomores Emily Giammolva and Antoinette Chiarella.

“I think next season, they’ll be ready,” Trepagnier said. “We had some up-and-down games. For some reason, it takes us a few minutes to get a footing, but once we do, we really start to get rolling. I think we had some good leaders this year, and we played together as a team.”