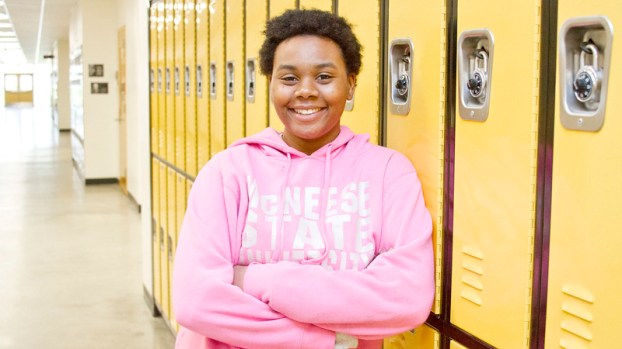 Laila takes a “glass half full” approach to stress as she maintains an excellent academic record and explores her passion for biomedical science.

“I have my days and I’m not perfect, but you can still strive whether you’re oppressed or depressed,” Laila said. “I try to find a positive outlet for everything. Since I’m a young black girl, there are going to be low standards set for me. I’m going to beat those standards with a smile. That’s the thing that brightens the room.”

Laila is a role model among her peers in East St. John’s Interact Club, a campus group founded on service. Though only a sophomore, Laila has met the group’s graduation requirements by accumulating more than 50 service hours.

In History Club, Laila helped create a “Voices of Our People’s History” documentary on Confederate monuments in New Orleans. The video won awards at district and state competitions and advanced to the national level in summer 2018.

Laila is also a member of East St. John’s Beta Club and a recent inductee into the National English Honor Society for her excellent performance in ELA classes.

She was the top scorer on the LEAP 2025 English II test in December with a perfect 850 out of 850, putting her in line with the most gifted students in Louisiana.

Reading has always been one of Laila’s preferred hobbies, but she finds the most joy in science classes.

“I’m fascinated by science, and I also like the medical field,” Laila said. “I would like to help people. Throughout my entire life, I’ve always wanted to be a veterinarian, but I’ve always liked to have a back-up because not everything in life goes the way it’s supposed to go. Since I love science, maybe I could be a biologist or a biochemist.”

Laila’s mother, Sherrell Smith, said Laila and her siblings have shown compassion for animals from a young age. It wasn’t a surprise to find mice, birds and sickly stray animals nursed back to health in Laila’s room.

On one occasion, Sherrell heard chirping in the house and found a Popsicle stick splint taped to a bird’s broken wing, which eventually allowed for the animal’s recovery and safe release.

Whichever path she chooses, Laila wants to love her future career and make enough money to look after her family.

Growing up in a household with a single mother means finances aren’t always readily available, but Sherrell said Laila has adapted effortlessly to changing home situations.

She’s immensely proud of her daughter’s self-motivation and drive to succeed.

“It’s the best feeling in the world when she comes home and says, ‘I won this,’ or ‘I’m doing this in school,’” Sherrell said. “She amazes me with everything she does because she has this passion to do the research and put it together for a beautiful outcome. I wouldn’t trade her for anything.”

For the past three years, softball has been one of Laila’s favorite pursuits. She made the varsity team her freshman year as a shortstop.

Charter School to open on Riverside Academy campus; RA will continue to operate