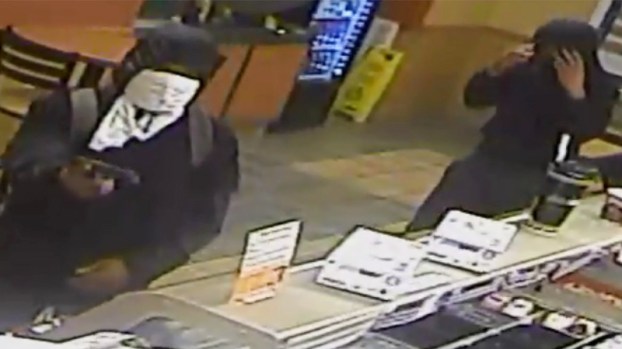 ST. ROSE — Two men robbed Subway in St. Rose Thursday night at gunpoint, stealing money from the restaurant before fleeing from the location.

According to St. Charles Parish Sheriff Greg Champagne, responding deputies conducted a thorough search of the neighborhoods surrounding the restaurant and have no reason to believe the robbers are still in the area.

The public’s assistance is being asked to identify the two men involved in the armed robbery, with authorities releasing surveillance photographs from the scene to the public.

A robber points a gun at an employee in St. Rose.

During the investigation it was learned that two men clad in black clothing entered Subway with one armed with a black handgun.

They demanded money from the restaurant employee and fled after receiving it.

Two men enter Subway Thursday before robbing it at gunpoint.

VACHERIE — A local woman was killed Wednesday morning, the result of a violent crash on Louisiana 3127 in Vacherie... read more