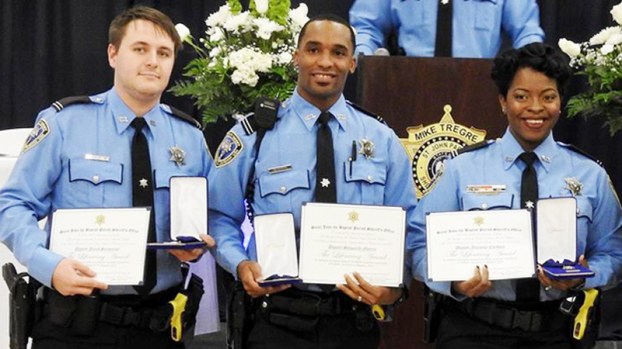 St. John’s finest recognized at Officer of the Year Banquet

St. John’s finest were recognized at last week’s Officer of the Year banquet in Reserve, and each award came with stories of service beyond measure.

Det. Sgt. Ann Taylor was named Officer of the Year for her compassion toward a juvenile suffering from extreme abuse and her devotion to the multi-jurisdiction trial that followed.

Sheriff Mike Tregre described Taylor, an 11-year criminal investigations employee, as “tenacious,” “methodical” and a great asset to his team.

In sharing the story of 2018 Officers of the First Quarter Dets. Carolina Pineda and Brandon Barlow, attendees heard details of an ungovernable juvenile capable of causing great harm.

A 16-year-old slipped under the closing garage door of a 21-year-old victim, pointed a handgun to her head and demanded money. The victim was able to resist, and the juvenile fled before robbing and sexually assaulting a 64-year-old at another home down the road.

Tregre said Pineda and Barlow went above and beyond the call of duty.

“Their quick response and training allowed them to get a guy off the streets that was a threat to the entire community,” Tregre said.

“This guy was not going to stop. They had very little to start with, but they got him quick. They took it personally.”

Det. Jonathan Walker, Officer of the Third Quarter, conducted a comprehensive investigation after the Special Operations Division received complaints from a local pediatrician that a former employee was writing and distributing fraudulent prescriptions.

Walker uncovered a conspiracy spread through five jurisdictions, which led to federal indictments.

Tregre said there were 24 individuals indicted in relation to the stolen pad.

“You and I both know about the opioid crisis and prescription drug epidemic we have going on in this country,” Tregre said. “I don’t have knowledge that anybody overdosed, but his work probably saved lives with his quick response.”

Tregre started the Officer of the Year awards banquet in 2013 to recognize service beyond what is expected in a daily routine.

“Stop the Bleed” tourniquet training contributed to the officers’ lifesaving actions when a man was quickly bleeding out after a gory machete attack in 2018.

“I look at the professionalism, how officers are conducting themselves and even the lawsuits,” Tregre said. “In the Training Department, I’ve seen significant improvements every year since (Wale) has been director.”

RESERVE — A teenager has been arrested in the shooting death of a Reserve woman. The St. John the Baptist... read more