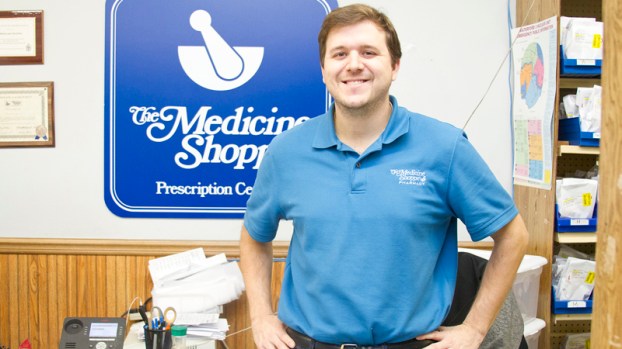 Andrew Gomila is the second generation owner of The Medicine Shoppe in LaPlace, which is celebrating 40 years in business in St. John the Baptist Parish.

LAPLACE — The Medicine Shoppe’s roots in LaPlace trace back to 1979, when at least six or seven independently owned pharmacies competed for business in the rapidly expanding town.

According to founding owner Bill Gomila, The Medicine Shoppe outlasted the competition and became the only independent pharmacy in LaPlace for the better part of a decade, until another opened in mid-2018.

Bill said longevity is a byproduct of personal service and a family-oriented atmosphere.

“When people come in, they know who the pharmacist is,” Bill said. “They know they’ll only have to wait 15 minutes for their prescriptions, and they know they have someone they can talk to. They’re not just a number. In the big box stores, you might have a different pharmacist every time, so there’s more consistency here.”

The Medicine Shoppe is located at 932 Carrollwood Drive in LaPlace.

Bill’s first storefront on Belle Terre Boulevard, known originally as Gem Drugs, opened when he and Byron Millet went into business together to operate stores in LaPlace, Reserve and Gramercy.

The partnership ended, and Bill changed the LaPlace location name to The Medicine Shoppe to fill a smaller niche market focused primarily on prescriptions.

Operations have changed in the years since, according to Bill. Pharmacies now bill insurance companies, which has evened the financial playing field among competitors and placed more importance on service.

Bill’s son Andrew Gomila now operates the second-generation family business, and he recalls his father staying on-call for emergencies 24/7 for more than 20 years.

Kyle Bourgeois and Andrew Gomila work to fill orders at The Medicine Shoppe in LaPlace.

In the early 2000s, the store became one of the first local businesses to offer compounding for individual medical needs, such as making liquid options of a medication for a child who cannot swallow pills.

Pharmacists at The Medicine Shoppe offer diabetic testing supplies and administer vaccinations for the flu, tetanus, pneumonia, shingles and other illnesses.

The Medicine Shoppe continued to grow through the 2000s after St. Martin’s Pharmacy patriarch Tommy St. Martin sold his inventory and patients to the business and came on board as a part-time worker.

Bill is now semi-retired and focusing his efforts at the Slidell Medicine Shoppe location, which he purchased in 2015.

Andrew and Susan Gomila smile next to their grandchildren.

Andrew didn’t always plan on joining the team. When he graduated from college in December 2010, he was on the verge of getting married and starting a family amid economic recession.

“My role here expanded over time after I started in 2011, and about a year or two into it, we knew it was a good idea for me to plan to take over,” Andrew said. “I grew up in LaPlace, so I knew a lot of people in town, but I’ve learned so much more about people and the interlocking family relationships people have around here. It really makes you feel like you’re more engrained in the town.”

LAPLACE — Aneka Moll of LaPlace wanted a better use for the formal dresses stocked in her closet, good as... read more