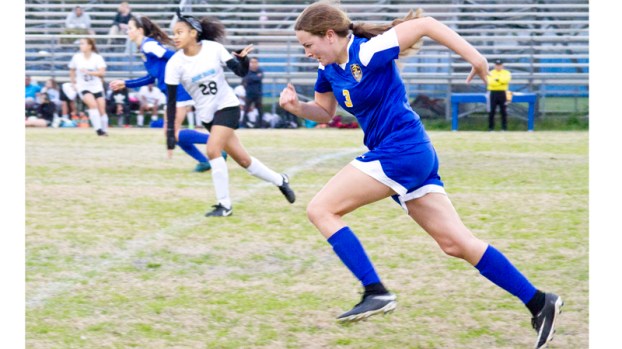 Lady Comets advance in playoffs; looking for redemption against Newman

LAPLACE — The St. Charles Catholic girls soccer team proved coach Travis Trepagnier wrong Friday evening when they came out blazing against Thomas Jefferson in advance of a 7-1 win in the first round of the playoffs.

The Lady Comets seemed to drag through the pre-game warm-ups, while the Lady Jaguars were alive with excitement for their school’s first girls soccer playoff appearance.

“I didn’t like the way we warmed up because it felt flat and like we didn’t have a lot of energy,” Trepagnier said. “They proved me wrong. They came out on fire, made good passes, made good decisions. It was a tale of two halves, and both of them were good.”

The Lady Comets scored all seven goals in an action-packed first half. Proven team leader Eden Simoneaux lived up to expectations and scored three goals against Thomas Jefferson.

Emily Ronnenburg looks to control the ball for SCC.

He said Ronnenburg’s goal was particularly exciting because it was her first of the season.

While the goals stopped in the second half, there was no slack in great gameplay.

“We had a lot of our sub players and our back-up keeper go in for the second half, and they experienced a lot of good fighting and good competition,” Trepagnier said.

The entire field was in high spirits after the win, including girls on the opposing team.

The celebration gave way to intensive practice early this week as the Lady Comets shifted their focus to the regional round in hopes of correcting last year’s mistakes.

In the 2018 playoffs, St. Charles Catholic suffered a 9-2 loss against Isidore Newman in the second round.

The No. 9 Lady Comets have a chance for redemption at 7 p.m. today on the Isidore Newman field in New Orleans. Trepagnier said the usual playoff strategy is to face every opponent as if they are the top team in the state. The Lady Comets are familiar enough with Newman to know advancing to round 3 won’t be an easy feat.

“Newman is an institution,” Trepagnier said. “They find themselves in the state championship almost every year.

“As good as we played in that half, I don’t think it will be good enough. We have to wait for opportunities and capitalize on them. They will capitalize on our mistakes.”

Trepagnier has seen improvement throughout the season, especially in fighting for goals and passing with confidence.

After starting off with back-to-back losses, St. Charles exited regular season play with a 10-5-1 record.

Scoring, generally limited to one goal per game in the early season, now hovers around three goals per game. Games ending in six or seven goals are becoming more frequent.

Colette Rainey continues to be an anchor on defense, while keeper Taylor Abair is improving every year.