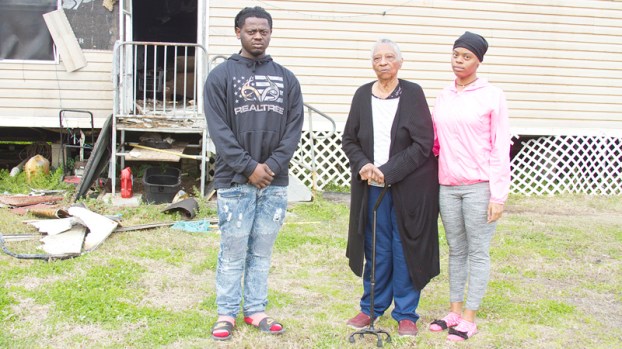 Lyndell, Lizzie and Lameka McGuffy stand outside their home, which was destroyed by fire on Thursday.

Fire destroys family’s Reserve home: “How could I start over at 80 years old?”

(Editor’s Note: This story has been updated to reflect the correct address for donations to be dropped off.)

RESERVE — Lizzie McGuffy of Reserve, 80, has stood in her front yard to see her home in shambles on three occasions.

The first was when she was 12 years old, caught inside with her siblings during a house fire. In 2008, she evacuated for Hurricane Gustav and returned to find her roof ripped off and her belongings soaked with water.

Lizzie’s life was overturned once more Thursday night when she and two of her grandchildren narrowly escaped a massive electrical fire that resulted in a total loss of her mobile home. The three escaped from 133 NW 13th St. in Reserve and were checked by paramedics for smoke inhalation.

They are staying with Lizzie’s daughter-in-law, all personal belongings lost, as they contemplate how to rebuild their lives.

Lyndell McGuffy was cleaning under his bed around 7 p.m. when he accidentally pushed the frame against an outlet near the air conditioning system. The outlet sparked upon contact and immediately caught fire.

The fire started to spread within 15 seconds, according to Lameka McGuffy, who was in the room to help sweep. The next minute felt like a dream, the siblings said, or an action movie they never wished to be part of.

While Lameka ran outside to call 911, Lyndell scurried to grab his belongings, then abandoned them to find his grandmother as flames overtook the room.

Lameka said it was a team effort to pull Lizzie out of the house in time.

“We’re looking for her telling her, “Come on, come on!” Lameka said. “He (Lyndell) was pushing her, and I was pulling her coming down the stairs. At this point, we didn’t know if we were about to blow up or what.”

In that moment, Lizzie wasn’t sure she wanted her grandchildren to risk their lives for her.

The fire was eliminated by 9:45 p.m., but the damage was already done.

“How could I start over at 80 years old? That’s all I could think,” Lizzie said. “They were getting me to come out, and I was thinking maybe I want something to blow up and get me because I don’t know how to start all over again.”

The family commends the St. John Parish Office of Fire Services for arriving on scene within minutes. The fire was eliminated by 9:45 p.m., but the damage was already done.

Paramedics were on scene to check the victims for smoke inhalation after Lyndell collapsed. He recovered quickly, and no injuries were sustained.

Lizzie said Red Cross arrived on site and volunteered to help her replace her medication and home equipment for her disability.

Having lost everything, the family is greatly in need clothing in the following sizes: women’s size 11 to 14 and size 24 pants, women’s shirts size medium and larger, men’s large shirts and size 36 pants.

Donations can be dropped off at 428 Lacour Drive in LaPlace. Financial donations may also be directed to gf.me/u/qhgbn5.

“We’re trying to take it one day at a time,” Lizzie said. “Please, just pray for us. I’ve always liked to be independent and the head of my own household, but it’s not about what I want. It’s whatever God wants.”

RESERVE — Getting more certified teachers in classrooms is St. John the Baptist Parish School Board members No. 1 goal... read more