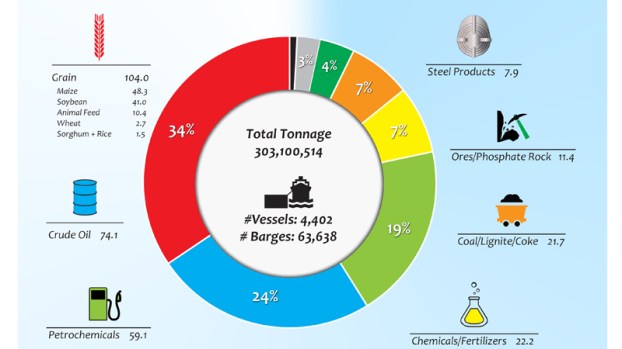 Total throughout 2018 registered as the second best year on record for the Port of South Louisiana (2017 is ranked first with 307.9 million short tons) as commodities were moved through its facilities via 4,402 vessel and 63,638 barges.

Furthermore, the increase of 2.9 million short tons in domestic receipts can be credited to gains in Maize (19 percent), Petrochemicals (9 percent), and Wheat (28 percent).

Though contentious U.S.-China trade negotiations have affected U.S. exports of agricultural goods, particularly Soybean, we are hopeful that the outcome will be positive pending on late-2018 Soybean orders from China and on-going trade talks between the two nations.

On the flip side, tariffs on steel seem to not have impacted the movement of this commodity.

We are thankful for the continued success of the Port of South Louisiana, an accomplishment to be credited to our first-rate industries.

The Port’s comparative advantages continue to attract investment, particularly foreign investment, with at least $16.2 billion of announced projects expected to come on-line in the next couple of years.

We look forward to their positive impact, not only on the Port of South Louisiana in terms of commodity movement, but on economic prosperity in the River Region.

Keller: ‘The Game of Life’ helps with wisdom

In 1955, while serving in the Navy, I read an article from Ann Landers. It impressed me then, so I... read more