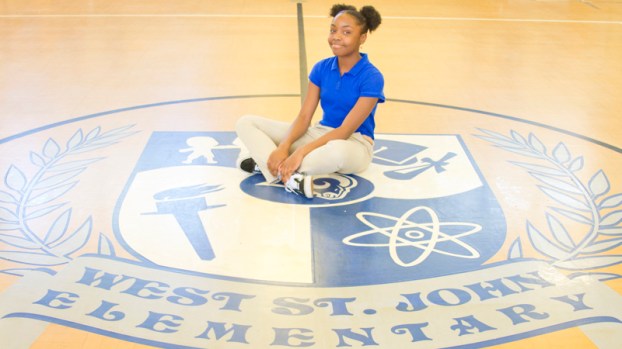 EDGARD — Fifth grader Cydnee Lewis’ leadership skills stretch beyond her years, evidenced by peer support and participation in groups in and outside of West St. John Elementary.

Cydnee juggles a busy schedule as captain of the cheerleading squad, parliamentarian of Beta Club and historian of Student Council.

After the last bell rings, she serves as team captain for the Divine Dancerettes at Kaye’s School of Dance in Edgard.

Her enthusiasm for participation beyond the classroom has not gone unnoticed. In January, Cydnee was shocked to find her name on a congratulatory Student of the Year poster hanging in the hallway near the front of the school.

“I was surprised when I first found out,” Cydnee said. “I was going against two friends, and I thought we all had a good chance to win. I was happy.”

During the Student of the Year selection process, Cydnee submitted an autobiography and answered questions about how she would improve the school in an interview with teachers and administration.

Cydnee talked about the importance of hands-on experimentation in a science curriculum and expressed a desire to diversify lunch choices in the cafeteria.

Principal Chantell Walker said Cydnee stands out as a well-spoken child with extensive extracurricular experience that exemplifies her as a leader in her community.

“She’s well rounded,” Walker said. “I work very closely with the Beta Club, so I got to see firsthand how much of a leader she is. She takes charge in meetings. She also does things outside of school with her church.”

Cydnee expresses her faith outside of church through liturgical dance choreographed to illustrate praise and worship. Her dance studio also focuses on majorette dance, and she’s excited to march in parades this Mardi Gras season.

Fall 2018 marked Cydnee’s second season on the WSJE volleyball team, a sport she described as “fun and interactive.”

Cydnee is equally gifted in the classroom. She achieves honor roll, usually all ‘A’s, every nine weeks, and her mastery and advanced LEAP results scored her membership in the 750+ Club.

“When I get up every morning, I know I have to do my best and try hard,” Cydnee said. “I know I have to work with my classmates and listen, and I’ll get rewarded for things I do good.

“A reward I look forward to is being able to go out and speak how I feel about being Student of the Year.”

Cydnee hopes to inspire her peers by showing kindness and lending a helping hand.

Math is her favorite subject because it comes naturally, and she once dreamed of becoming a doctor.

However, when her mother asked why she wanted to be a doctor, Cydnee realized she didn’t have an answer. Soon after, she started brainstorming career paths that fit her interests.

“I could be an entrepreneur and have my own business one day,” Cydnee said. “My dream business would be to sell clothes and have a spa. I can design my own things and hire people.”

Cydnee, of Edgard, is the daughter of Michael and LaShondra Lewis.