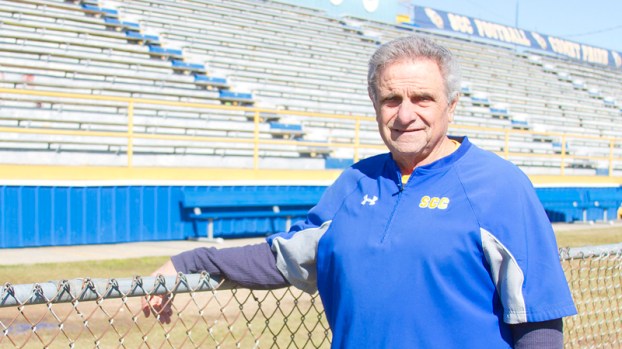 LAPLACE — St. John the Baptist Parish native Frank Monica knew he was stepping into a lifetime of late night dinners, 90-hour work weeks and weekend travel far from home when he accepted his first coaching position in 1971.

For Monica, who has coached football at St. Charles Catholic since the late 1990s, the past 48 years have been a labor of love marked by triumph and sacrifice.

Monica’s accomplishments will be lauded April 2 when he is inducted into the Louisiana High School Sports Hall of Fame at the Crowne Plaza in Baton Rouge.

Friends saw Monica as the perfect Hall of Fame prospect for years, while he questioned whether he was old enough or experienced enough for the recognition.

For many years, inductees nominated by LHSAA and LHSCA member school principals and coaches had to be retired.

“I never even thought about it when I started coaching,” Monica said. “I didn’t feel worthy at the time, and I don’t know if I feel worthy now. It’s more of a credit to the assistant coaches, the players that you’ve coached and the administrators that helped you along the way.”

Monica’s success could not have come without support from his wife, Nancy.

“When I was getting married, I told her, ‘I want you to understand this is what I am,’” Monica said. “I’m a football coach. I don’t have the luxury to be here seven days a week. Nancy accepted that role. She was a trooper. She was the stability of the family, not me. I was kind of like a visitor.”

Frank Monica sends the Comets back onto the field during a 2018 game against County Day. SCC (8-4) completed another successful season last year, which included a six-game winning streak that ended one victory short of a state championship game appearance.

When he finally rides off into the sunset, Monica wants to be a more present grandfather for his 11 grandchildren. Retirement plans haven’t been set, Monica said, but the end is in sight.

Monica’s athletic career revolved around family from an early age. After losing his father at 5 years old, he received tremendous support as the athlete of the family from his three brothers and four sisters.

His siblings cheered him on at Reserve High School as he played linebacker and guard in football and shortstop in baseball.

Monica pursued college baseball at Nicholls and played in the infield before the university established its football team.

He stayed at Nicholls one year after graduation to coach baseball before accepting a head baseball and assistant football coaching position at Lutcher High School in the early 1970s.

Monica was promoted to head football coach during his eight years with the Bulldogs. For the next two decades, he bounced around from an assistant coaching position at Tulane University to Riverside Academy, then to Jesuit and back to Tulane.

Monica’s sons, Ty and Nick Monica, and nephew Wayne Stein led him to a coaching position at St. Charles Catholic in the late 1990s.

In his high school coaching career, Monica led his team to state championships at Lutcher, Riverside and St. Charles Catholic with an overall 269-84 record.

According to Stein, Monica’s work ethic has remained steady throughout his career, from age 22 to 70.

“His accomplishments and his record speak for themselves, but from a mentor’s standpoint, he’s someone who always worked side-by-side with his assistants and did everything he could to make sure he was the hardest working man in the building,” Stein said.

Ty coaches softball and football at SCC, and Nick recently accepted a head football coach position at Archbishop Rummel High School, where he has coached baseball for many years.

Monica doesn’t foresee the Comets going head-to-head with the Rummel Raiders in the next few years, and he said playing against his son’s team would be “a lose-lose situation.”

Proximity to family kept Monica a Comet, even as other opportunities arose.

“I thought I was leaving after two years, but I guess my own kids encouraged me to stay,” Monica said.