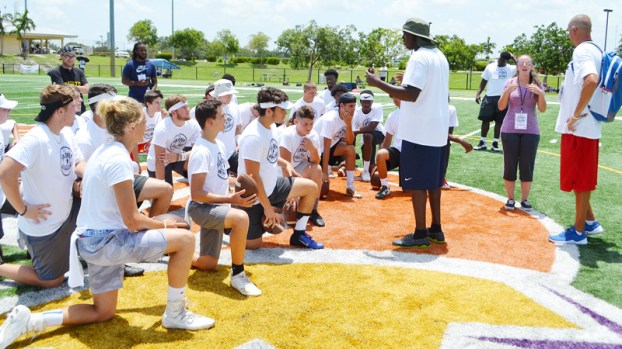 RESERVE — East St. John High’s Joe Keller Stadium is going to be the first of seven stops in a nationwide competition for top-performing high school quarterbacks.

The search is on for quarterbacks across the southern U.S. to compete in the invitation-only Air Attack Quarterback Challenge from 10 a.m. to 1 p.m. March 2 in Reserve.

The Air Attack QB Challenge began three years ago when coaches Oliver Bozeman, of Florida, and Craig Bryden, of Connecticut, aspired to create a competition similar to “an old school pro bowl” at the high school level.

Last year’s Air Attack challenge in Miami spotlighted the top talent in the country and included an appearance from former NFL quarterback Michael Vick. Numerous competitors received major college offers from the likes of the University of Florida, University of North Carolina and University of Michigan.

Eager to expand on the success, Bozeman and Bryden are traveling to Louisiana, Ohio, Colorado, Connecticut, Rhode Island and Maine over the next several months. Winners from each stop will be invited to a national Air Attack competition July 26 in Miami.

St. John the Baptist Parish became the first stop on the road trip through Bozeman’s friendship with ESJH football coach Brandon Brown. The two competed together at Alcorn State University in Mississippi.

Craig Bryden, left, is the only deaf quarterback coach in the country. He partnered with coach Oliver Bozeman, right, three years ago to create a national search for elite talent among high school quarterbacks.

“I’m so excited about the things Brandon Brown is bringing to the area where he grew up,” Bozeman said. “He’s restoring the tradition and bringing it back to what it once was. I like that he’s the person to keep those kids on the right track and not get into a position where they wouldn’t be able to play football or continue their education. The positive influence he has is very important to that community and that school.”

Bozeman said Brown welcomed him with open arms because they share a goal to highlight local talent and open the door to national exposure.

Brown is excited for the Air Attack challenge and hopes to get ESJH quarterbacks Sean Shelby and Marcus Jackson involved.

“Anytime we get a chance to get our kids some exposure, it’s an amazing experience,” Brown said. “This area has been a hotbed of talent for many years. This is home for me, so I want to use my network and connections to get as many kids exposure as possible.”

According to Brown, social media has been blowing up with athletes from as far away as Mississippi and Alabama looking for a spot in the Reserve camp.

Bryden, the only deaf quarterback coach in the country, is reviewing highlight reels submitted online.

At the event, quarterbacks will find an obstacle course, rings propped upright on the field goal post and trash cans spread across the field. Throwing accuracy is key to earning points in a series of competitions, according to Bryden.

“It was all put together to be a fun competition, but also a way to test accuracy, arm strength, speed and agility,” Bozeman said. “We’ll put together a list of top quarterbacks that scored over a certain number and shoot that information out to scouts.”

Quarterbacks also have an opportunity to create profiles at airattackqb.com.

For more information or to submit a highlight reel, visit @AirAttackQBCamp on Twitter.

RESERVE — The Memphis Tigers football team finished the 2018 college season with an impressive 8-6 record, which included a... read more