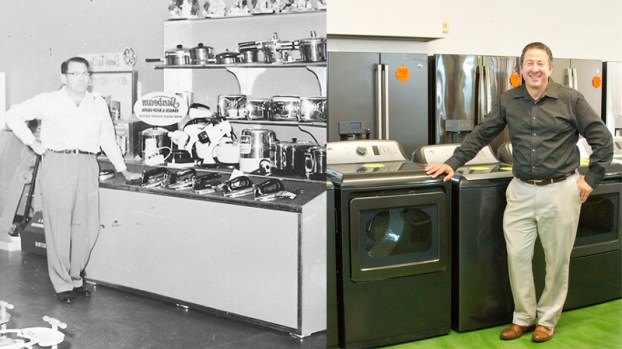 At less than 5 years old, Michael wanted his own white shirt to match. By age 10, he regularly helped out at the family business Haydel’s Furniture & Appliances at 541 Apple St. in Norco.

L.J. Haydel, an electrician by trade, left his career with Shell Chemical Norco Complex in 1929 to open his own business. The general manager at the time urged against it, warning L.J. new businesses wouldn’t outlast the wrath of The Great Depression.

The manager returned with an apology and offered congratulations at the 1956 grand opening of the current Haydel’s storefront, secured after more than 25 years in business out of various buildings along Apple Street.

L.J. Haydel has some fun with granddaughters Susie and Pam Haydel at the family store in Norco.

According to Michael, the third-generation storeowner, Haydel’s also carried bicycles, lawnmowers and tractors in the early days, before the store grew into its furniture and appliance identity.

Even after enduring a stroke, L.J. couldn’t part with the store until he passed away in 1982. Michael’s father, Harold, started working in the 1940s and didn’t retire until the early 2000s, not long before he passed in 2008.

Michael never doubted he’d come to operate Haydel’s. Strapping on the white shirt as a child was a precursor to stepping into his grandfather’s shoes to keep one of the oldest connections to Norco’s history alive and thriving.

“I enjoy meeting people and helping people, especially the ones who come in and tell stories about my grandfather and father,” Michael said. “It was great to hear some of the stories about the 30s and the 40s and the 50s. They used to have fairs in Reserve, where they would go set up the new appliances. People would come in here talking about how they remembered him bringing the appliances for people to see.”

Older customers recall Haydel as the drop-off payment site for Louisiana Power and Light, the precursor to Entergy. Others still ask if the store closes for an hour at lunchtime, though that practice ended decades ago.

Store officials unload furniture from a train stop in the 1950s.

Most customers from St. Charles and St. John the Baptist parishes come in with referrals from parents, grandparents, aunts and uncles, according to Michael.

Sales and marketing manager Scott Forsythe said the multi-generational legacy draws customers in, while quality service brings them back.

“A refrigerator isn’t something you just go shop for,” Forsythe said. “You buy a refrigerator when yours is on the verge of dying. We have a lot of that kind of stuff in stock when you need it, whereas you have to wait for it when you order from other stores.”

Attention to detail separates Haydel’s from online furniture stores, according to Michael, who said his staff is always ready to answer questions.

Danielle St. Martin, a 34-year employee, said Haydel’s has a comfortable atmosphere, and each customer is treated like family.

The feeling is always the same, even as new furniture and appliance trends come to the forefront. According to Michael, rustic furniture has been a best seller for the past seven years, and a new age of interactivity reflects in the newest products.

Ovens can be preheated and dryers can start at the click of a button from smart home apps. Michael said power recline living room furniture with USB ports and hybrid coil-memory foam mattresses are also popular.

According to store officials, rustic furniture has been a best seller for the past seven years, and a new age of interactivity reflects in the newest products.

GE appliances have been a staple over the decades based on reliability and serviceability.

“We’re up to date with carrying the best products at competitive pricing,” Michael said. “If it had not have been for my grandfather establishing what he did early on with quality products and service, I don’t know that we would exist today. We want to thank all of our customers because we could not have done this without them.”

RESERVE — East St. John High’s Joe Keller Stadium is going to be the first of seven stops in a... read more