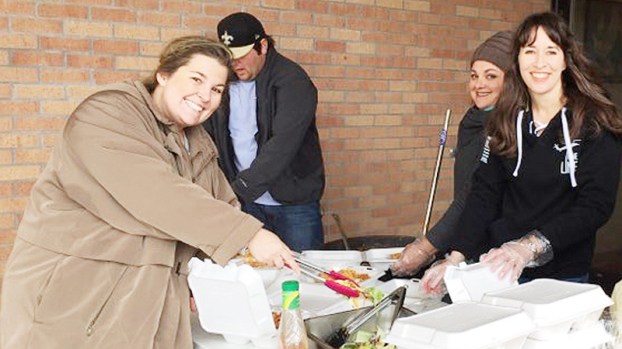 Lindsey Vicknair, from left, Alex Vicknair, Amber Duhe and Rebecca Simoneaux put together dinner plates, which were recently sold locally to raise money for Coast Guard families in need because of the federal government shutdown.

LAPLACE — Inspired by the U.S. Coast Guard ethos to defend, save and shield people of the United States, LaPlace mother Jennifer Norris-Martinez felt a calling to assist military families who suffered from the recent federal government shutdown.

While her 19-year-old U.S. Coast Guard son, Alex Norris, doesn’t have many bills to pay, he shared how his friends struggled to provide for their wives and children through weeks of missed paychecks.

Government officials reached a temporary resolution to end the shutdown Friday, but the impact lingers. Luckily, Norris-Martinez and a group of devoted St. Joan of Arc parishioners raised more than $2,700 to help families navigate through rough financial tides.

“They hadn’t gotten a paycheck since Jan. 1, and I saw there was really a need,” Norris-Martinez said. “My son is 19, and he lives in the barracks or on a ship, but there are people with kids and bills and houses. It’s heartbreaking to go to work and not get paid. Most families can’t even fathom it.”

Chris Eichhorn and Alex Vicknair volunteered to cook, and Baba Oncale raffled off her renowned “fleur-de-lis” fudge. Lindsey Vicknair and Amber Duhe were also essential to coordinating the event, according to Norris-Martinez.

Norris-Martinez said those volunteers are her “go-to” group for brainstorming charity events since they previously worked together to raise money for a little boy battling cancer.

Teamwork brought the fundraiser together, and community support made it a success.

“I don’t think anybody asked for change. One person bought four dinners, gave us a $100 bill and wouldn’t take change.”

While most were busy mourning the end of the Saints season that Sunday evening, Norris-Martinez took a trip to Walmart and purchased nearly $2,400 worth in gift cards.

An additional $300 has been collected since in money dropped off at the church. Other gift cards and diapers donated were also delivered to needy families via a drop-off to Seth Eury, president of the U.S. Coast Guard Chief Petty Officers Association.

Norris-Martinez will remember the Jan. 20 fundraiser as a cause to unite all branches of military.

Eichhorn, the first person contacted to cook, is a former U.S. Marine.

“We got a big kick out of it because I’m a Navy daughter and a Coast Guard mom, and he’s a Marine,” Norris-Martinez said.

Eichhorn said he wouldn’t miss an opportunity to provide for Coast Guard members and federal workers who fulfilled their oath of duty despite not being paid.

“It was an opportunity to table our friendly in-service rivalry and work together as America always does when called upon,” Eichhorn said.

“I want to salute Jennifer Norris. She is a tremendous member of our community who steps up whenever someone needs help.”

Giving back felt great, but Norris-Martinez won’t be satisfied until there is a permanent resolution to the shutdown.

“I hope we won’t be doing this again in three weeks,” Norris-Martinez said. “These people don’t need to be used as a pawn.”