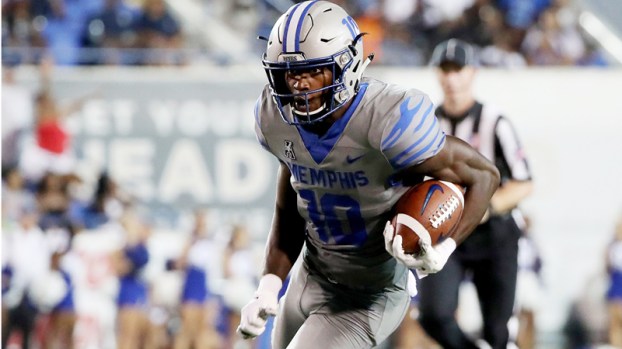 Damonte Coxie led Memphis with 72 catches, 1,174 receiving yards and seven touchdowns during a breakout 2018 season for the Tigers.

RESERVE — The Memphis Tigers football team finished the 2018 college season with an impressive 8-6 record, which included a heart-breaking 37-34 defeat in the season finale Birmingham Bowl Dec. 22.

One of the season’s highlights was the breakout performance by third year sophomore wide receiver Damonte Coxie.

Each mark for the Reserve resident led the team.

With a junior season mere months away and dreams of professional football opportunities in sight, the collegiate star took some time this month to speak to members of the St. John Parish Sheriff’s Office Distinguished Gentlemen’s Club during a gathering at Rotolo’s Pizzeria in Reserve.

Coxie encouraged the group to resist peer pressure, work hard in school and focus on achieving their goals.

Sgt. Steven Faucheux welcomed the group, and several officers who serve as mentors met with students from middle and high schools to discuss school, hobbies, extracurricular activities, and future plans.

Damonte Coxie speaks with local students this month at Rotolo’s Pizzeria in Reserve.

Coxie was the guest speaker.

The officers hope to guide the young men in building traits of good character that prepare them to be productive members of society.

Coxie is already that type of young man, something his receivers coach, Desmond Lindsey, noted during the season when he said Coxie “brings energy on a daily basis.”

“And his leadership skills have progressed,” Lindsey said. “He tries to lead by example. From the time I’ve gotten here — from the winter drills to now — he has been busting his tail.”

Coxie was a multi-sport star at East St. John High, excelling on football fields and track stadiums following a transfer from Tara High.

He was a member of L’OBSERVATEUR’s All-St. John football team after a senior season that included 54 catches, 1,182 yards and 12 touchdowns.