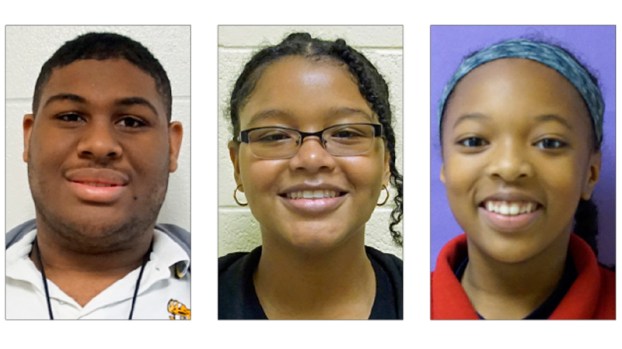 Cameron Cage, Emani Payne and Chaela Alexander have been recognized as top students in St. John the Baptist Parish.

RESERVE — The St. John the Baptist Parish Public School District has named its District Students of the Year as Cameron Cage, Emani Payne and Chaela Alexander.

12th Grade Student of the Year

Cage is a member of the National Beta Club, Gamer’s Club and the Technology Student Association. He serves as a volunteer student tutor for eighth-grade students at John L. Ory Communication Arts Magnet School and is also tutors and mentors his peers at ESJH in ACT prep.

Cage was recently named one of the school district’s ACT Elite for his score of platinum on ACT WorkKeys. Cage has also maintained a 4.0 GPA and perfect attendance this school year.

For the past three summers, Cage has participated in the Xavier University Summer COE Program, which introduces students to pharmacy education and pharmacy practices.

Cage’s favorite subjects are math and science. After graduation, he plans to enter college to pursue a degree in mechanical engineering.

“Cameron Cage is an exceptional model of creativity, ingenuity, inquiry and humility which permeates throughout our senior class,” East St. John High School Principal Christopher Mayes said. “Cameron is committed to meeting and exceeding expectations while inspiring others to seek excellence.”

8th Grade Student of the Year

The District 8th Grade Student of the Year is Emani Payne, a student at the St. John STEM Magnet Program.

Payne is involved in Beta Club and debate. She is the head programmer for First Lego League robots on the Robotics Team. She is a straight-A student who has been on the honor roll since first grade and is part of the Gifted Academics program.

Payne one day hopes to pursue a career that deals with a heavy amount of engineering, architectural design, game designing/coding or robot design.

“Emani Payne is a very intelligent, hardworking and kind young lady who loves science and goes above and beyond on everything she does,” STEM Magnet School Assistant Principal Gillian King-Hughes said.

Emani Payne holds up her cell phone, displaying a picture of an owl she drew.

5th Grade Student of the Year

The District 5th Grade Student of the Year is Chaela Alexander of Garyville-Mt. Airy Math and Science Magnet School.

Alexander is a 4.0 student who earned a score above 800 on her last LEAP test in both ELA and math. She is the GMMS Beta Club president, captain of the cheerleading team and participates in 4-H, Gifted Academics and Talented Theater. She is also lead programmer for the GMMS Robotics Team, which won the regional championship and qualified for state this year.

During the summer, she attended Coding Camp at the University of New Orleans. She placed first at both the District Science Fair and District Social Studies Fair this school year.

Outside of school, she participates in dance and has won several regional and national awards. She also enjoys baking and spending time with her family.

Following the death of her godmother at the hands of domestic violence, Alexander became an advocate for the issue and has spoken at public events to encourage others to get help.

“Chaela is the type of student who is diligent to get her work completed. She is also eager to learn new content while assisting her peers to make sure they understand what is being taught,” GMMS Interim Principal Glenn Chenier said.

“For several years I worked at another school where Chaela was a student and I observed her assisting her teachers with distributing and collecting work. She would stop by my office to talk about her day, want to know about the days that I worked at Disney World and would enjoy helping me even when I did not need assistance. These are reasons why Chaela is the St. John the Baptist Parish Student of the Year.”

The American Legion Post 383, LaPlace La., is sponsoring the building of one of the largest Veterans Memorial’s in Louisiana.... read more