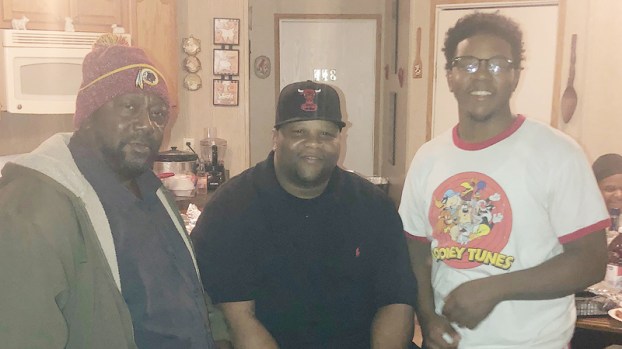 Three generations of family men are seen, including grandfather Frank Gardner, father Nick King and son Dylan King. A scheduled surgery Friday is planned for Dylan to donate a needed kidney to Frank.

LAPLACE — Dylan King of LaPlace didn’t know the full extent of his grandfather’s four-year battle with kidney disease until the two shared a heart-to-heart in October.

By this time next week, the grandfather and grandson will share a pair of kidneys.

Dylan, 21, isn’t fearful of being wheeled into an operating room. Surgery is scheduled for Friday, and it feels like a long time coming.

The moment Dylan heard Frank Gardner’s kidneys were failing, he realized no risk outweighed the chance to improve his grandfather’s quality of life.

Frank felt the first impacts of kidney disease in 2014, when he experienced body swelling and difficulty breathing. As the disease progressed, he became confined to a dialysis machine three times a week, for at least three hours per session.

According to Frank, Dylan’s offer to donate his spare kidney was awe-inspiring and unexpected.

“It stunned me,” Frank said. “I was shocked. I said, ‘Hallelujah, thank you, Jesus.’ I had tears and I smiled. I feel overwhelmed that I have a chance to live longer than what my natural life would be. I’m nervous, but I’m ready.”

Before arrangements were made, Frank urged Dylan to consider his decision, taking into account health concerns that could result from having only one kidney for the rest of his life.

“He said he would love for me to give him one of my kidneys, but I would have to think about how my life would be and how I want to live my life,” Dylan said.

“If you only have one kidney, you have to stay healthy, watch what you eat and watch what you drink. I thought to myself, I have two healthy kidneys, so why can’t I give him a kidney? I don’t drink, and I don’t smoke, so why not?”

With plans to log eating and exercise habits after surgery, Dylan traveled to and from the doctor for blood tests throughout December. Each test came back positive, indicating his kidney was a perfect match for Frank.

Doctors indicated the duo is at the top of transplant waiting lists in case either kidney fails down the road, according to Dylan.

“I’m excited,” Dylan said. “I’m ready for him to receive this kidney. I pray to God that it works perfectly and he’s able to do everything normally with one kidney.”

Dylan first heard of living kidney donation years ago from his mother’s co-workers. However, the true inspiration for his selfless act is a solid relationship with Frank built upon years of shared experiences.

As a child, Dylan spent Friday nights with Frank in the East St. John High School bleachers, soaking up the excitement that surrounds football season. Their passion for sports connected them, and when Dylan earned a spot on the Wildcats football team in high school, Frank rarely missed a game.

The two watch football games on the weekends when they aren’t cheering from the stands. On weekdays after work, Dylan often calls his grandfather or visits.

“We know how to communicate very well,” Dylan said. “We’re on that level. I admire his strength and his drive. No matter what comes his way, he’s going to keep going and strive for the best to help himself. This is my way of thanking him for all he’s done for me.”

Dylan’s offer was shocking, but not out of character, according to Frank.

“He’s an excellent grandson,” Frank said. “He loves to help people. He’s an amazing guy. I love him, and I want to thank him.”