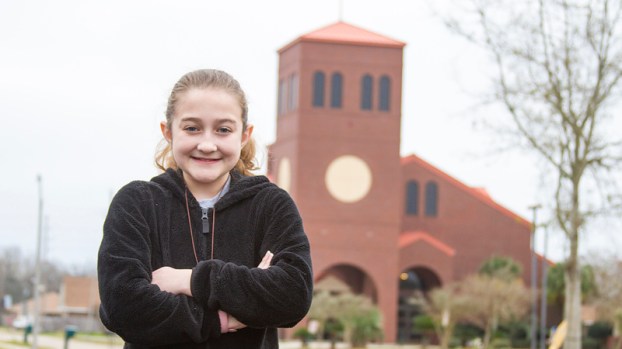 Caylee Drexel of LaPlace, a sixth grader at Ascension of Our Lord Catholic School in LaPlace, was diagnosed with pars planitis, an inflammation of the eye that typically causes blurred vision, floating spots in the vision and progressive vision loss.

LAPLACE — Caylee Drexel of LaPlace was in third grade when her vision turned yellow.

Alarmed by the sudden change, Caylee told her parents, who then booked an appointment with an eye care specialist in Texas.

Caylee remembers leaving her hospital room when the doctor returned to deliver the examination results. At only 8 years old, she was diagnosed with pars planitis, an inflammation of the eye that typically causes blurred vision, floating spots in the vision and progressive vision loss.

Three years later, Caylee is a sixth grader at Ascension of Our Lord Catholic School in LaPlace.

She’s endured two surgeries and takes a myriad of medications, including six hard-to-swallow pills each Monday night and an injection every two weeks.

The yellow tint in her vision disappeared after the procedures. The long-lasting impact of the journey, according to Caylee, is her close-knit relationship with God.

Caylee Drexel has leaned on inspiration from St. Lucy, a saint invoked against diseases of the eye.

“I wasn’t really scared for the first (procedure) because I knew they were going to put me to sleep,” Caylee said.

“The second time, I was so scared, so I just prayed to God that I was going to be OK. I really wanted to ask Him how to get through this.”

Caylee also drew inspiration from researching St. Lucy, a Catholic saint invoked against diseases of the eye, throat infections and other ailments.

“She really was a part of my life, too, and she was really close to me when I had my procedures,” Caylee said.

Trips to Texas are still part of Caylee’s life every three to four months, though her doctor is beginning to wean her off the frequent appointments.

AOL school counselor Christine Escobar said Caylee faces her eye condition with the maturity of adults two or three times her age. Though her vision is clear, a pars planitis diagnosis comes with the threat of cataracts, retinal detachment or eventual partial or complete blindness.

“She didn’t know if she was going to be able to see again, and I’ve seen her confidence grow over the years just with going to the doctor,” Escobar said.

“Before, she’d be nervous because you don’t know what they are going to tell you. Now, it’s, ‘I got this.’ I think she had true confidence everything was going to work out. Her maturity in her faith gets her through it.”

Caylee lives her faith as an Ascension of Our Lord altar server at Friday school Mass and on weekends. She’s taken the 2018-19 school motto “Grow in grace” to heart by becoming an active participant in 4-H and Beta Club.

“I think it’s important to be in different clubs because I need to add a little fun to my school year this year,” Caylee said.
Caylee looks forward to participating in an upcoming 4-H songfest performance to the tune of “New York, New York.” In Beta Club, she helped program a Lego Mindstorms robot to set off a chain reaction and recycle a can.

Caylee is smart and kind, evidenced by her many honor roll achievements and Christian Citizenship awards.

Her vision struggles haven’t stopped her from competing in competitions and shining in recitals at Performing Arts Dance Center in LaPlace.

Dance became a passion before she was old enough to speak in full sentences, and she’s celebrating 10 years of performance in 2019.

Caylee is the daughter of Brent and Clare Drexel of LaPlace.

Older sisters Cassie and Corinn inspire her to set the best example for her younger brother, Brayden.