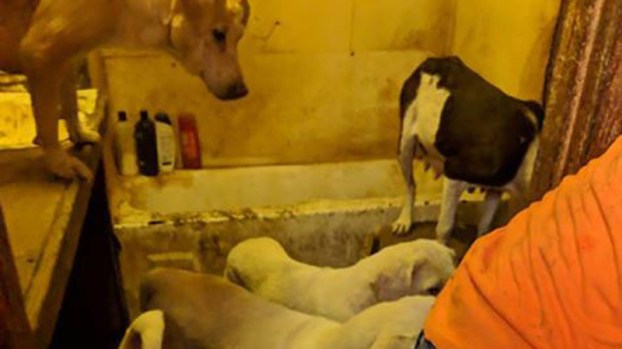 Dogs are seen in horrendous conditions Jan. 18 during a seizure effort in Pleasure Bend.

LAPLACE — More than 140 dogs were removed from “horrendous” conditions, parish leaders say, causing a second problem this week as The St. John Parish Animal Shelter has become overwhelmed with rescued animals in need of care.

Since then, the Animal Shelter began receiving calls from neighbors who suspected something but never reported it.

“All calls to the Animal Shelter are anonymous,” Shelter Manager Rachael Sance said. “Don’t be afraid to voice your fears if you suspect something is going on.”

Authorities said the homeowner is an elderly woman still residing in the home in poor living conditions.

Dogs are seen in horrendous conditions Jan. 18 during a seizure effort in Pleasure Bend.

The animals were seized Jan. 18 because attempts to get the animal situation under control were not successful.

Sance said the living situation and possible investigation are out of the Animal Shelter’s control, but the details have been reported to the appropriate resources and authorities for help.

As of Wednesday, 141 dogs were seized from the home, with approximately 15 still needing rescue.

All dogs previously at the Animal Shelter were moved to a Jefferson Parish facility before last week’s intake. Most cats were moved to Acadiana Animal Aid.

Most of the dogs seized are hound mixes. Others include smaller, full-grown terrier mixes, weighing between 15 to 20 pounds.

The dogs are in great need of human socialization, Sance said.

“People can come and read to the dogs,” Sance said. “It doesn’t matter what you read, because they won’t understand, but they’ll pick up on your energy level and associate human voices with a calm feeling.”

Those who aren’t afraid to get dirty are asked to volunteer at the shelter to clean dog cages due to a “great need.”

Donations of all types of cleaning supplies and dog food are needed at The St. John Parish Animal Shelter, where volunteers are also needed to care for the dogs.

Sance said this is an opportunity for residents to earn service hours because the Shelter “desperately” needs volunteers and foster homes. The shelter will supply wire kennels, food, bowls, medical treatment and flea and heartworm prevention while dogs are in the care of a foster family.

Young children aren’t recommended since the seized dogs haven’t had much human contact and are fearful and unsure of people.

“These dogs are frightened but do not bite,” Sance said.

Monetary donations to cover medical care and more can be made to the St. John Parish Animal Shelter during business hours or via paypal to paypal.me/friendssjas.

Parish President Natalie Robottom said the local shelter will not be able to absorb the number of seized animals without assistance.

“Some can be adopted, some may not and some are wonderful animals but they were living in horrendous conditions,” Robottom told Council members this week. “No one likes to take pets, but the mere fact that there were 140 dogs on the property is problematic in itself.”

— Staffers Brooke Robichaux and Stephen Hemelt contributed to this report.

Caitlyn Ursin was ready for last week’s Saints game. She just needed to swing by the grocery store for a... read more