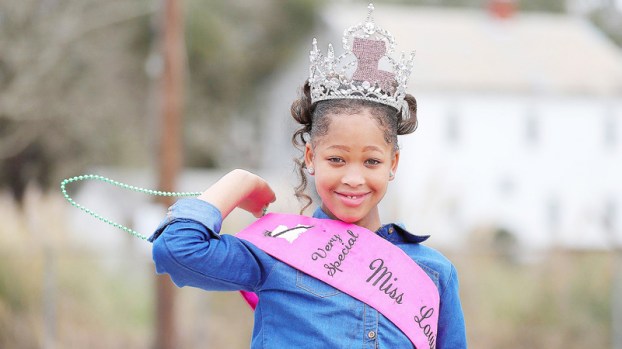 C’Jea Frank of LaPlace gets ready to launch a Mardi Gras bead during last year’s Krewe of M.A.C. parade in St. James Parish. C’Jea relinquished her title and crown Saturday for Very Special Miss Louisiana following an eye-opening year of service across the state.

LAPLACE — C’Jea Frank of LaPlace, 9, proudly wore her Very Special Miss Louisiana crown as a key to opportunity over the past year and braved through her inhibitions in the process.

Brandi Frank cried as her daughter turned over the crown to a new queen Saturday night in Hammond, recounting the momentous change Very Special Miss Louisiana brought to their lives.

C’Jea has always been a happy and loving child at home, according to Brandi, and that bubbly spirit was out in full effect when she won the crown in 2018. Dressed in a stylish blue gown with a braided “Elsa” hairstyle and lipstick to match, C’Jea charmed judges with waves and blown kisses.

That personality hasn’t always been evident in public settings, according to Brandi. As a child with autism and a chromosomal syndrome, C’Jea senses when children and adults treat her differently.

Representing Very Special Miss Louisiana for the past year has made C’Jea more comfortable in her own skin and a more effective communicator despite her speech impediment, Brandi said.

“My daughter has opened up so much,” Brandi said. “The Very Special Miss Louisiana pageant opened us up to (people and places) that embrace special needs children. That made my life so much better because I saw my child in an element I haven’t seen in so long.”

Brandi has felt shunned by other parents at times for having a child who struggles to keep still and quiet at appropriate moments. In the past year, that feeling of seclusion shifted into an outpouring of love.

“Being a parent of a special needs child, it makes you so isolated because you feel you don’t have the ability to attend these kinds of events,” Brandi said. “We have been overwhelmed with things to do, and it’s all because of her being Very Special Miss Louisiana. It’s an amazing opportunity.”

C’Jea started her reign with an appearance in the Krewe of Agape Mardi Gras court and a prime seat in the Krewe of M.A.C.’s second annual St. James Parish parade, where she received an acknowledgement from State Rep. Ken Brass.

In addition to participating as a visiting queen in numerous festivals across the state, C’Jea attended the Tickfaw River Regatta fundraiser and greeted athletes at the Special Olympics in Hammond.

She recently met with Lieutenant Governor Billy Nungesser, Governor John Bel Edwards and their wives at the State Capitol.

According to Brandi, C’Jea’s experience working in the community with her family helped her stand out above competition.

Brandi and her daughters have made their house a home away from home for young girls in the community to learn the importance of anti-bullying and anger management strategies.

Abrams started the pageant in 2014 as a way to provide more inclusive activities for her friend’s daughter with Down syndrome. It’s evolved rapidly through the years, growing from 19 contestants in 2014 to 54 in 2019.

“We’ve probably raised over $30,000 in the last five years,” Abrams said. “Our goal is to get this pageant in every state and eventually have a national title.”