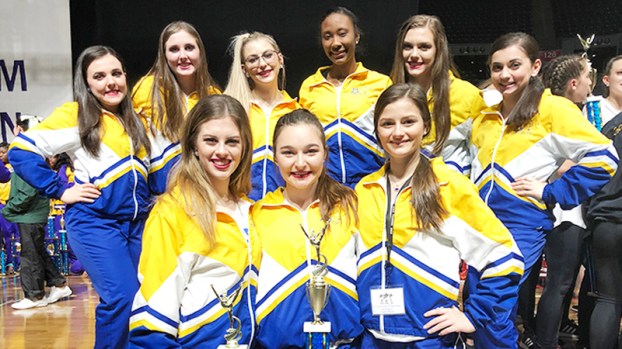 Like last year, the nine-girl team was faced with reconfiguring a kick routine backstage, only minutes away from performing for a panel of judges.

The Starsteppers rose to the challenge and took home third in kick, along with a fifth-place finish in jazz and a second-place title in pom.

The girls were a joy to watch on stage, according to Christine Creppel, who ended her 15-year career as Starsteppers director when she was promoted to assistant principal this year at St. Charles Catholic.

Creppel filled in as coach for the state competition while director Carly Flynn led a Comets trip to Washington D.C. for the annual March for Life rally.

“I was so impressed with how quickly, within 10 minutes, the girls changed counts and choreography so kick would work with one person missing,” Creppel said.

“It stands out the most because I really saw them come together as a team.”

The jazz routine to “Young Blood” displayed the girls’ passion for dance, Creppel said, while the pom dance was a high-energy crowd pleaser incorporating mash-ups of upbeat songs.

Each year, the Starsteppers dance their hearts out year-round, save for a one-month vacation in July.

Whether they are performing at summer camps, football games or competitions, 100 percent dedication is required.

The Starsteppers will look much different next year, with five senior dancers graduating this spring.

Creppel has been especially impressed by the spirit of co-captain Sara Guidry, who attended every practice despite being sidelined by injury for her entire senior season.

“She broke her foot the day before the first football game of the season,” Creppel said.

“Even though she couldn’t dance, her heart was all in it. Some athletes would’ve been bitter, but she stepped up as a leader because she loves the team and she loves dance.”

Senior co-captain Keri Clement, also a four-year SCC dancer, stepped up as a leader this year. Clement was consistently on-point with knowing what changes needed to be made in choreography and technique, according to Creppel.

Junior Syndey Pfister is returning to the Starsteppers next year, along with first-year freshmen Chloe Genovese, Allie Powell and Lauren Weber.

“These three new members really had to keep upping their game the whole year, and they really had a lot of perseverance,” Creppel said. “They are so dedicated and persistent. We had a really fun-loving team this year, personality wise. They love to tell jokes and laugh, so that was a fun part of this year.”

LAPLACE — The St. Charles Catholic Lady Comets have turned around a rough start to the soccer season with help... read more