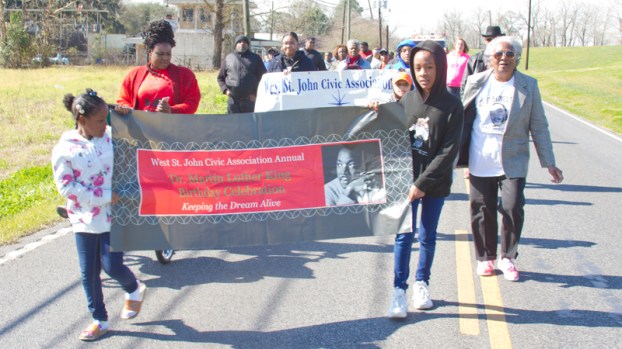 Members of St. John the Baptist Parish's West Bank community and beyond march Monday along River Road in Edgard during a celebration of Martin Luther King Jr. Day.

“We need to work a little harder to get our children to recognize what this day really means,”Bourgeois said. “Our kids are putting in the work, but they aren’t here.”

Education was a focus at the memorial service, hosted by the West St. John Civic Association. Organizer Warren Coleman Jr. referred to it as the key to a productive society built upon equal opportunity.

In an opening address, Mary Elizabeth Johnson said hope for a better tomorrow is up to each individual.

“We must educate our youth because there is still work to be done,” Johnson said.

“This is our voice. This is the purpose of the West St. John Civic Association.”

Batiste, a local educator and devoted follower of Jesus Christ, promotes education near and far by securing academic scholarships for students in Uganda and Kenya.

Though he’s never felt the pressure of a water hose or the bite of a German shepherd’s teeth, Batiste sees the 21st century version of racial inequality.

“We have overcome some hurdles only to be shackled by other obstacles, like a record number of foreclosed homes; neighborhoods filled with drugs; parks with no benches. These are a few examples that indicate our work is not well done, but there is still hope. We shall overcome some day.”

Senseless killing of unarmed minorities, voter suppression and racial profiling leading to elongated sentences in the criminal justice system show a society hurting from wounds of the past, Batiste said.

King’s concerns for his four children decades ago are still alive as today’s parents, who worry whether young adults will be taunted or shot for the color of their skin.

“It may not be happening in Edgard, but it is happening somewhere as I speak,” Batiste said.

He urged attendees to never forsake their right to vote paid for by the blood, sweat, tears and lives of those who fought to combat social injustice.

In closing, Batiste asked attendees to stand with their community, not just in thought, but also in action.

LAPLACE — Ascension of Our Lord fifth grade Student of the Year Luke Bordelon strives to be the best version... read more