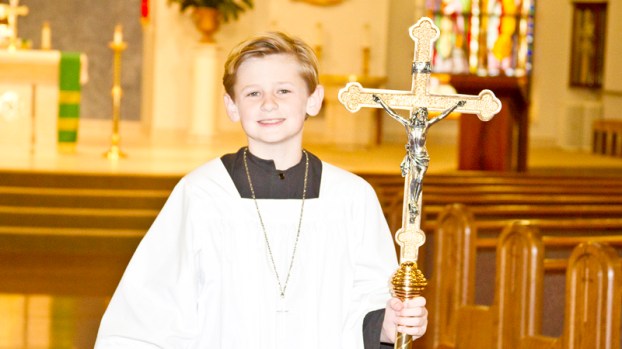 LAPLACE — Ascension of Our Lord fifth grade Student of the Year Luke Bordelon strives to be the best version of himself by giving 100 percent effort in everything he does.

He always stays true to himself, and school counselor Christine Escobar said that strong sense of character helped Luke stand out from his fellow fifth graders in the Student of the Year selection process.

Each year, fifth grade nominees write biographical essays reviewed by a school committee and sent out into the community.

“In his essay, he talked a lot about God, his religion and his love for family,” Escobar said. “That’s what stood out to a lot of community members. A lot of kids don’t have that strong faith value like he does.”

Escobar said Luke’s family provides a solid foundation that reflects in his work and demeanor at school.

Luke was shocked when he heard his name announced on stage during AOL’s recent Student of the Year presentation.

“I felt really good,” Luke said. “I actually thought I wouldn’t get it because I had to fight against many people who had very good essays, too.”

Luke’s parents, Keith and Michelle Bordelon, were present for the announcement. It was a “mischievous” move on their part, according to Luke, since they previously told him they were coming to his school for a meeting.

Student of the Year is far from the first award Luke has received at AOL. He’s the recipient of five Christian citizenship awards, an accelerated reader award and honor roll certificates dating back to first grade.

Luke Bordelon is a first year member of the AOL basketball team.

Luke was also honored at 4-H Achievement Day for good record keeping in his 4-H book, which recounted his experiences creating first aid kits, candles and other resourceful products.

As an altar server, Luke volunteers his time to God during church services on Friday, Saturday and Sunday.

He’s also an avid competitor in baseball, basketball and swimming with a love for topping his own records.

Luke started playing T-ball at 5 years old and has developed into a strong utility player who covers every position “except for shortstop” on his school and LARAYO recreational baseball teams.

He picked up basketball a few years ago and brings his talent to the school team for the first time this year. Over the summer, he was known on the Riverlands swim team as the sixth strongest freestyle competitor in his age group.

“Anything he puts his mind to, he’s going to give it 110 percent,” Gaubert said. “He couldn’t wait to get the watch and see what he could do. He’s been building himself up, working harder.”

Gaubert has known Luke since he was a small child, and she said his personality has always shined bright.

“He’s always been Luke,” Gaubert said. “You don’t have to ask him to do anything. He’ll come up to you and ask if you need help. He motivates everyone.”

Science teacher Hunter Songy agreed, adding Luke is an “awesome kid who is very kind to his peers.”

According to Luke, being attentive in the class is a big part of being Student of the Year.

“Being a good student means I respect the teachers,” Luke said. “They really like it when people pay attention.”

LAPLACE — Visitors to the St. John the Baptist Parish government complex will have to be at least 50 feet... read more