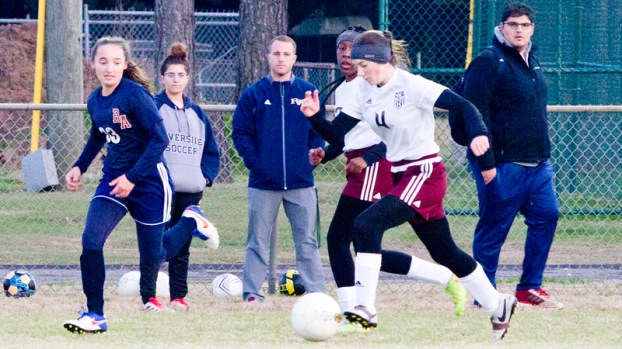 Chloe Simon, No. 33, shown in action during Riverside Academy’s 4-1 victory over Covenant Christian, has blown away all expectations in her first year playing competitive soccer as a sophomore.

LAPLACE — Lady Rebels junior Jada Williams was on fire during Tuesday’s soccer match against Covenant Christian, scoring three goals during a 4-1 win in what coach Ryan Zeller has referred to as the best game of the season thus far.

The Riverside Academy girls exit the week at 3-6 following a 1-2 loss to St. Charles Catholic, but Zeller said the young team is on a track to improvement.

The Lady Rebels played a complete game and earned a 4-1 win over Houma Christian Tuesday at home.

Without any seniors to lead the pack, underclassmen and newbie players have run headfirst into starting positions.

“I feel like they’ve grown a lot and started playing as a team more,” Zeller said. “At the beginning of the year, it was kind of hard to come together as a team because of the age difference between some of them. From then to now is a complete difference.”

At the forefront is Williams, an offensive force who can outrun most of her competitors. She is the leading goal scorer this year, scoring in all but two games.

Junior Lexi Johnson can play anywhere on the field, “from defense to up top,” according to Zeller.

Johnson is also developing into a leader among her peers.

RA’s Ashley Hymel looks for a lane to move the ball during Tuesday’s game against Covenant Christian. Only a sophomore, Hymel has already developed as a player others look to.

“Lexi is the enforcer,” Zeller said. “She’s the leader that holds everybody accountable.”

Ashley Hymel is another “do-it-all player” known for setting up plays in the midfield, according to Zeller. A lot of the girls look up to Hymel, though she is only a sophomore.

Chloe Simon, also a sophomore, has blown away all expectations in her first year playing competitive soccer.

“She just goes and gets the job done. She’s a spark on this team that we definitely needed.”

With regular season play concluding next week, Zeller said the Lady Rebels must come out strong in the three remaining games to secure a spot in the playoffs, an opportunity that was missed last year.

LAPLACE — The St. Charles Catholic Lady Comets have turned around a rough start to the soccer season with help... read more