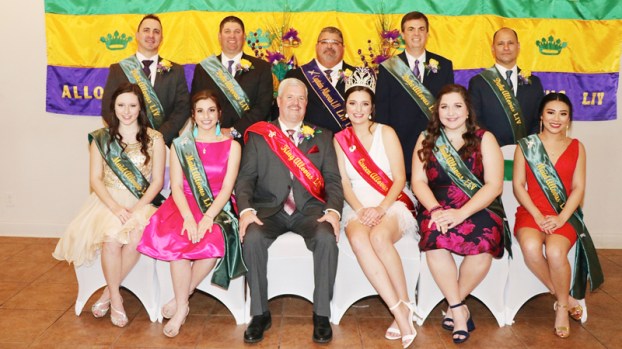 David F. Ratliff and Julia Rayne Cupit will reign as King and Queen Allovus LIV during the annual ball Feb. 23 at “Allovus Takes a Flight of Fancy” at St. Charles Catholic High School in LaPlace.

They will be joined by Krewe of Allovus court members selected based on participation in the LaPlace Area Recreational and Youth Organization (LARAYO) and Krewe of Allovus for the past 54 years. Family and youth activities are the focus of their organization.

To build community spirit and celebrate Mardi Gras, the krewe was formed by members of LARAYO in 1965.

That year the first ball and parade rolled with Bertram Madere as Grand Marshal and chief assistants Arnold Labat and Kyle Madere along his side.

The Allovus Krewe paraded until 1971, then they turned over the parade to the LaPlace Jaycees, who organized Krewe du Monde.

Allovus is the oldest carnival krewe in the River Parishes.

King David Ratliff has been married to Kelly Becnel Ratliff for more than 24 years. They have three boys, Jonathan, Patrick and Adam, who recently married to Melissa.

David has been a member of LARAYO for more than 20 years where he served on the board. He worked with special projects and moved to the boy’s director of baseball for more than 15 years.

His wife, Kelly, has been chairwoman of the Queen’s Committee for 18 years.

David coached football, baseball and basketball at St. Joan of Arc for 13 years.

He is the plant manager of Premier Chemicals and co-owner of Firehouse Subs in Gonzales.

He is also a board member of the Help Dat Foundation, a non-profit organization.

Queen Julia Rayne Cupit, the daughter of Drew and Helena Cupit of LaPlace, is a 2018 December LSU Graduate in the College of Business.

Julia is the marketing director for Chick-fil-A Gonzales.

Her involvement at LARAYO includes 13 years of softball and 15 years of swimming, as well as lifeguarding and concession work.

They have three children, Gabriel, Baylor and Caraline.

Chris is the son of Ida Ebers and the late John Kugler and is a graduate of Riverside Academy and Delgado Community College, where he earned an Associate Degree in Mass Communication.

He served in USMC and has been employed with Marathon Petroleum as a Process Operator for the past 11 years.

Chris and his family have been members of LARAYO for seven years, where he has enjoyed coaching his sons in baseball as serving on the LARAYO Board since 2016.  This is an exciting year, as this is Chris’s first year as a member of Allovus.

Chris enjoys sports, holidays and life with his family.

Rianna Jesita Breaud is the daughter of Gary and Dana Breaud of Reserve. Her siblings are Dustin and Sierra Lynne.

Rianna is a 2018 graduate of Riverside Academy and is beginning her second semester as a sophomore at Northwestern State University, majoring in Biology. Rianna is a member of the NSU Pom Line Dance team.

Rianna has been involved with LARAYO for eight years, playing softball and handling presentation of the gifts at the social for a year.

Her father, Gary, was Duke Allovus XLVll and her grandfather and aunt have been on past Allovus courts.

Duke Michael P. Landry is married to Elizabeth Dufresne Landry and is the father of three children, Michael Paul, Nicholas and Catherine.

He is a graduate of Hahnville High and has been employed with Bayer Corporation/Monsanto for the past 22 years.

Michael and Elizabeth have been members of LARAYO together for the past five years, although Elizabeth has been in the LARAYO family for more than 30 years.

Jun and his wife Marie have been members of Allovus for several years and have been very involved in the LARAYO Organization.

Michael has been an assistant coach for his son’s baseball teams and is on the LARAYO Board, serving as director of swimming. He enjoys hunting, fishing, cooking and especially spending time with his family. Michael and his family reside in Wallace.

Maid Macie Nicole Reine, daughter of Michael and Alisha Reine of LaPlace, is a junior at St. Charles Catholic High School, where she is a member of the Beta Club and is on the equestrian and track teams.

Her roots in Allovus and LARAYO run deep, as her family has been involved in each organization since they were founded.

Macie’s grandfather, the late Mack E. Reine Jr., was an active board member of LARAYO, as well as captain, duke and king of Allovus.

Macie played softball for LARAYO from ten years and swam on the swim team for several years. Mike and his wife, Alisha, are active members in Allovus and LARAYO.

John graduated from Louisiana State University and is the director of accounting at Laitram LLC.

John has been a member of LARAYO for 16 years. While at LARAYO, he has served on the board of directors and the pool committee.

She is a member of the Retreat Team, a Eucharist Minister and a School Ambassador.

She was chosen as Outstanding Junior Female Student and achieved the Gold Award for service hours during the 2017-18 school year.

She also served as volleyball manager for three years.

Madison has been involved with LARAYO for 10 years. Her father was Duke Allovus XLIX and served on the LARAYO Board as Director of Baseball and Treasurer.

They have three daughters, Caroline, Ava and Kate.

Derrick is a process operator at Valero St. Charles Refinery. He has been a member of LARAYO for three years where he serves on the LARAYO Board of Directors, coaches softball and is a member of the grounds committee.

His wife’s family has been lifelong members of LARAYO and Allovus.

Her dad, Lance, was a Duke in Allovus XLIX. Both of her parents have been involved in Allovus for ten years.

In her free time, Sophia volunteers at Ozanam Inn serving meals to the homeless.

She spends the summer lifeguarding at LARAYO, counseling a vacation bible school and hosting a cheer camp at SCC.

Captain Allovus LIV Daryl Paul Cox has been married to the former Anna Marie Wille for 31 years. They have two children, Christopher, married to Leslie, and Rebeca, married to Alan Jurisich.

Daryl is employed by Cargill as its electrical supervisor.

Their family has been members of LARAYO for the past 20 years. Their children played ball and swam until they aged into high school sports. During those years, Daryl, has been on the board of directors for 12 years and was the president of the organization for the past eight years.

He and his wife have been members of the Krewe of ALLOVUS going on 16 years, serving on the concession and decorating committee through the years.

He was Duke Allovus XLIII and Ball Chairman from 2014-16. He has served as Captain for the Royal Courts of LII, LIII and LIV.

LARAYO and Allovus has become the heart of their family. As Captain, he would like to express his sincere thanks to the Krewe of Allovus for their support, hard work and dedication in continuing to hold the Allovus ball for the 54th year.

He and his Lady, Anna, stated this is their last year serving as Captain. During these three years they have loved and cherished representing the Allovus organization. They want to thank the loyal Allovus Krewe members, without them they would not have succeeded.

The playcall was simple for LaPlace’s Natasha Clement: Deliver delicious and unforgettable food for Drew Brees and his guests at... read more