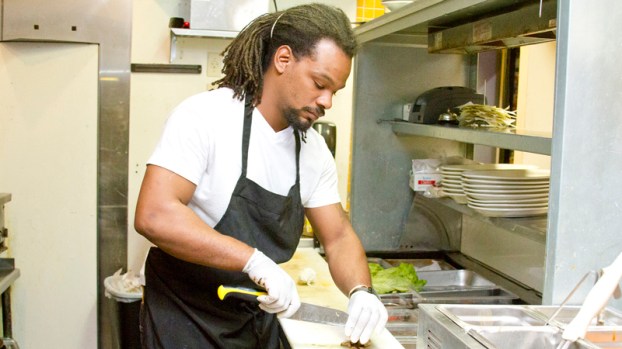 Ellis Ranson chops up some delicious delights in the kitchen at 360 Restaurant Bar & Grill, which opened this month in LaPlace.

Javer and his team have worked tirelessly since December to renovate the restaurant and bring in a new menu with a “360 appeal” to suit everyone’s tastes.

Located at 1338 W. Airline Highway Suite 7A in the Riverlands Shopping Center, 360 Restaurant Bar & Grill opened this month to bring a new dining experience to LaPlace.

Javer said 360 has a noticeably different atmosphere and menu than Louisiana Roadhouse, which most recently occupied the space.

“This restaurant is a completely different entity; a different owner and a different vision,” Javer said. “I think this town needed something nice and upscale. People are tired of eating the same things. They need something different.”

Owner Moe Javer said 360 is a casual dining experience with an upscale theme, and he envisions it becoming a place where people come to socialize.

Some menu items have carried over, including fried seafood platters, burgers and appetizers popular in restaurants across Louisiana.

Javer, an experienced chef of more than 20 years, said 360 shines in its new food offerings.

Wings, grilled and broiled fish, sandwiches and calamari are among the highlights, according to Javer.

The 360 pasta has a special kick with alfredo parmesan cream sauce, mushrooms, sundried tomatoes and parsley.

An updated bar area and new menu items like French onion soup are part of a renovated restaurant and atmosphere on display at 360 Restaurant Bar & Grill, which opened this month at 1338 W. Airline Highway in LaPlace in the Riverlands Shopping Center.

“Before, it used to be more fried food,” Javer said. “Our menu might share some of the same stuff like seafood platters. It’s popular, people like it, but now we have a little bit of everything. It’s an infusion. That’s why we did the name 360. It’s all-around. We didn’t have to stick with a certain theme.”

Amy Wombles and Katie Vicknair were pleasantly surprised Wednesday when they stopped by 360 Restaurant Bar & Grill for lunch and noticed changes in pricing and decor.

Wombles anticipates coming back with her children.

“I like it a lot better,” Wombles said. “I like how it looks in here, and I like the menu. There are a lot of different sandwiches and burgers that are not very expensive. I have a family of five, and I was thinking I could come here now, and it’s like $10 for a meal.”

Portion sizes for the fried fish platter were excellent, according to Vicknair. She enjoyed the restaurant’s new look, which she described as more simple and understated than it was under past ownership.

Javer said 360 is a casual dining experience with an upscale theme, and he envisions it becoming a place where people can congregate and socialize.

Local musicians will be scheduled for live music at least once per month, according to Javer. Specialty nights, including steak and wine Mondays and Thursday Ladies Nights are in the works.

“Mistakes happen, but the way you deal with it is what makes a difference,” Javer said. “I am always here to help answer questions and address concerns.”

Applications are available at 1338 W. Airline Highway Suite 7A.

To-go orders and catering options are available. A private room to hold large parties of up to 40 people is being set up inside the restaurant, according to Javer.

The miracle of birth took on an incredible dimension for me on Jan. 7, 2019, with the birth of my... read more