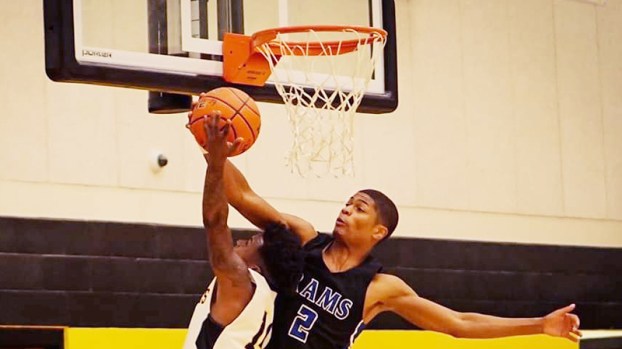 Junior Trenton Grow, above, is a returning starter who has improved his shooting and defense since last season. (Photo by Oliver Hooker)

Picking up in mid-December after a long football playoff run, the Rams were playing their first games as opposing teams started hitting their strides.

West St. John High hasn’t been a forerunner in gameplay thus far, exiting the week with a 2-9 record.

Jessie, a junior on the team, is confident better days are coming.

“We haven’t been playing our best, but you can tell we’ve been getting better day-by-day,” Jessie said. “We have more new players this year, so the chemistry has to build. We are learning what our teammates like to do and don’t like to do. At the beginning, we hadn’t played together and didn’t really trust each other. As we play more, you can see that trust building.”

Head Coach Alton Joseph said trust has been the mantra this season.

“I keep telling them that we all need to be on the same page,” Joseph said. “If we play together, the wins will come.”

Apart from facing a tough schedule with challenges from Terrebonne, Lutcher, East St. John High and St. James High, the Rams have also been tested by injury, according to Joseph.

Team co-captain Jahmal Bailey was sidelined by a knee injury early in the season and is awaiting an MRI.

“We’re looking for someone to replace the energy he brought offensively and defensively,” Joseph said. “The underclassmen are leading the way. I have a young eighth grader doing all he can right now to carry the team, and the older guys have respected him a lot.”

That eighth grader, Tyray Bartholomew, has started at point guard for the past several games. Joseph said Bartholomew “knows the floor” and has the skills to compete with juniors and seniors.

Returning junior starters Jessie and Trenton Grow lead in scoring, averaging between 10 and 12 points per game.

Grow has improved his shooting since last year, according to Joseph, and he easily transitions from defense to offense.

As one of the older players on the team, Grow said he reminds the young guys to stay focused and keep playing hard.

Tyray Bartholomew, who became a starter this season, has gained respect from older players as the team recovers from
losing co-captain Jahmal Bailey. (Photo by Oliver Hooker)

“We had a slow start, but I think it’s going well,” Grow said. “We need to make sure to play as a team. We have a young team, and I feel like we’re going places.”

Jessie shot up five inches in height since last season and has grown into an offensive threat. His goal is to make a deeper playoff run then last year, when the Rams fell in the first round of playoffs.

Once that is achieved, Jessie wants the Rams to power through to the final round.

“Our main priority is to win the state championship for the school,” Jessie said.

“We still believe we can do that.”

A District tournament scheduled for Feb. 12-15 will make or break the team’s chances, according to Joseph.

The Rams are preparing to travel to Ascension Catholic Wednesday and play a Friday home game against St. James.

The most shocking stat from the entire 2018 high school football season may have been the zero points scored by... read more