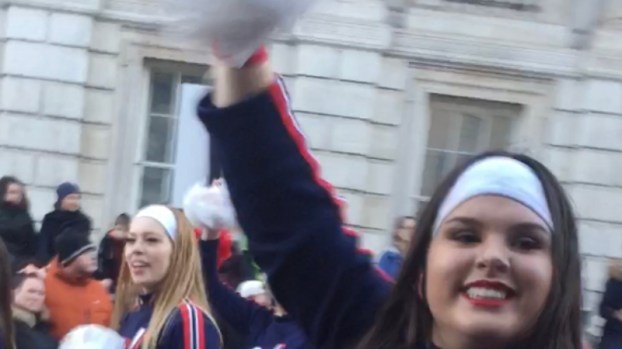 Ashlynn King is no rookie when it comes to cheerleading and parades.

As a 17-year-old varsity cheerleader at St. Charles Catholic, she has been front and center for numerous special events as either a performer or attendee.

Even that experience wasn’t enough to prepare her for London’s New Year’s Day Parade, where more than 650,000 spectators were reported to have lined the route from Green Park to Westminster.

Ashlynn was included in that number as a marching cheerleader.

“It was completely different from our parades,” she told me Thursday, a day after returning from England. “They had magic shows, 4-wheelers jumping ramps and cars right in front of you. There are no barricades around the grandstands. The 4-wheelers and motorcycles were doing wheelies right in front of you like it was nothing. There were all these old expensive cars. That was definitely the best part of the entire trip.”

According to parade organizers, there were 8,000 parade participants representing 26 nations.

Ashlynn left for England on Dec. 26 as one of more than 800 high school cheerleaders from across the United States representing Varsity Spirit.

Ashlynn and others were invited to perform as part of the All-American program, based on superior athletic and leadership skills.

Ashlynn King has been an SCC varsity cheer leader since eighth grade.

“It was definitely worth it,” Ashlynn said. “It was worth it before the parade even started, just seeing everything.”

Ashlynn, who turns 18 in March, said she was joined in England by her mother, father, his girlfriend, grandma and grandpa. She credited the large contingent for making the trip fun, adding numerous others on the trip came alone and didn’t appear to have as good a time.

As a five-year member of the SCC cheerleading squad, Ashlynn enjoys bringing spirit to the community.

“It’s fun to meet new people, cheer at the games and hang out with friends at practices,” she said, adding Friday night football games are the best part. “It’s a really good way to make friends and meet people.”

The cheerleading experience and her performance at a recent camp at Southeastern Louisiana University provided this New Year’s trip, which was her first out of the country.

The distance, which was extreme, was made better due to a direct flight from New Orleans to London, clocking in at more than eight hours.

She said the experience overseas was aided by friendly locals, adding her party heard plenty chants of “USA, USA.”

“It was pretty cool,” according to Ashlynn. “You didn’t feel like a foreigner. You felt like you fit in, kind of.”

Her tips for future visitors to London include enjoying the chocolate (“Their Cadbury bars are better than ours), partaking in afternoon tea and sightseeing in Windsor, which is west of London.

The New Year begins with classes starting Wednesday (Jan. 9) at the Reserve Campus. We have so many exciting things... read more