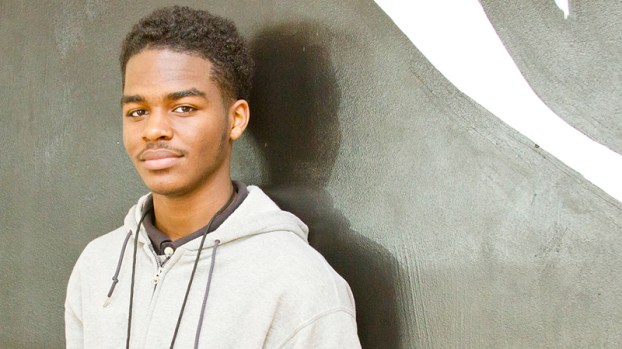 Outspoken and ambitious, Jaylin Darensbourg hopes to move to California after graduation to pursue a career involving songwriting, producing and directing. (Brooke Robichaux/L’OBSERVATEUR)

LAPLACE — Jaylin Darensbourg of LaPlace is outspoken and ambitious, eager to leave his mark on the West Coast music and film industries.

“It’s really crazy and strange for someone in Louisiana to do,” Jaylin said. “I want to be a songwriter; a producer and director; an actor. I want to do so much in that field, and I think it’s very important for me to go somewhere popular for arts and music because of the opportunities they give you.”

Jaylin’s dream would be to become a director for “sad, romantic movies” with an emotional appeal similar to “Titanic.”

Though he also loves “Carrie” and other horror flicks, Jaylin wants to focus on telling stories that resonate with real-world human experiences.

The 2018 film “A Star is Born” featuring Lady Gaga and Bradley Cooper added more fuel to Jaylin’s drive to direct.

Jaylin and his younger brother have participated in a handful of acting auditions since last year. He received a role in an African American children’s movie, which lost funding, and was recognized among a crowd of 500 for his audition with Barbizon Modeling and Acting.

Jaylin Darensbourg attended a Beyonce concert in September based on his excellent academic, conduct and attendance records at East St. John High.

Acting is a fairly new pursuit for Jaylin, who got his start as a dancer in St. John Theatre’s production of Hairspray in summer 2017.

Jaylin frequently writes songs and stories while drawing inspiration from situations that unfold around him.

“I observe a lot,” Jaylin said. “I go off of what I see based on how people interact with each other or what I see in nature.”

Motivational speakers and celebrities who use their spotlight to promote charity also inspire Jaylin.

In September, he was part of a select group of students chosen to attend Beyonce’s concert at The Mercedes-Benz Superdome in New Orleans based on his excellent academic, conduct and attendance records at East St. John High.

It was an incredible and unexpected experience for Jaylin, who never bases his hard work on potential awards.

His favorite classes — history, accounting and English — are those where he’s surrounded by the friendly competition of fellow overachievers who push each other toward success.

Accounting teacher Jennifer Chauvin said Jaylin stands apart because of his compassion for others.

“He’s unique for many reasons,” Chauvin said. “Not only does he take care of his own work and go above and beyond in everything I give him, but he’s always willing and ready to help other students.”

English teacher Michael Shedrick said Jaylin has the traits needed to work in politics. According to Shedrick, Jaylin took the initiative to organize a National Walkout Day event in the politically charged atmosphere that followed the Parkland school shooting.

“He doesn’t act like any other student,” Shedrick said.

“He’ll comment on things that happen at school. A lot of times, he will get really political about it. When all the school shootings were happening last year, he kind of went against administration and said we need to have a real protest. He had everybody walk out, and that shows his strength in leadership. People follow him.”

Jaylin is also an active participant in 4-H and its extension program, 4-H Junior Leaders. Through the organization, Jaylin volunteers at the Southeast Louisiana Veterans Home and teaches leadership principles to younger students.

Jaylin is the son of Kammi Darensbourg and the nephew of Terrell and Anitra Calvin of LaPlace.