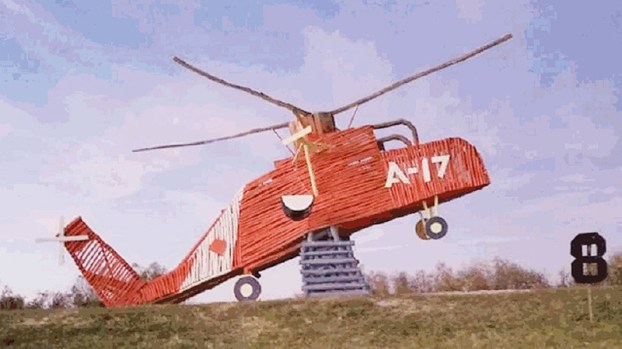 More than a dozen people contributed to the building of a helicopter bonfire on the West Bank, which burned Dec. 24 in Lucy.

LUCY — Damian August was standing on the levee near his Lucy home, preparing to construct a T-Rex bonfire with family and friends when a Coast Guard helicopter flew overhead.

The group of 14 men watched in awe and changed their plans to honor those who dedicate their lives to service.

Instead of a dinosaur, it was a Coast Guard helicopter bonfire that warmed a crowd of nearly 100 West Bank residents and tourists Christmas Eve when its deep red paint turned to bright orange flames.

The group never has a solid plan when it comes to bonfire season, August said. The men brainstorm ideas and see where the construction takes them without mapping out measurements or models beforehand.

It always leads to the same result: endless memories form when friends gather in a huge crowd and light the way for Old St. Nick with food, music and celebration.

August said it’s a way to keep a fading tradition alive on the West Bank of St. John the Baptist Parish.

“It’s something I picked up on as a kid, and I handed it down to my kids to get them involved and keep the tradition going,” August said.

“A lot of people backed off from it. We used to get out there with hatchets and even take our moms’ butcher knives to do it. We’re just trying to get them back into it. It’s about the designs and the unity when you have functions with people.”

August is seeing revitalization on the West Bank as families delve into more intricate bonfire designs.

Since his childhood, August has been familiar with the teepee design. In the past 10 years, he’s drawn inspiration from the East Bank group Blood, Sweat & Bonfires and other local families to come up with new creations.

In 2008, August and friends constructed a log cabin bonfire. The years that followed brought about a Mississippi Queen riverboat and a bonfire shaped like a character from the Disney film “Cars.”

One year when the Saints were playing well, the guys made a bonfire of a referee holding his hands up for a touchdown.

Other locals have followed suit with their own creations, including the Roussel family’s towering black and yellow crane.

“You see people do different things and get different ideas,” August said. “When we first started doing the designs, we saw it was a good idea for the community.”

August said the bonfires are typically completed in less than a week, a feat that would not be possible without a strong group effort.

Yvette Perrilloux reached out to me in October. She had a really cool story. As a St. John the Baptist... read more