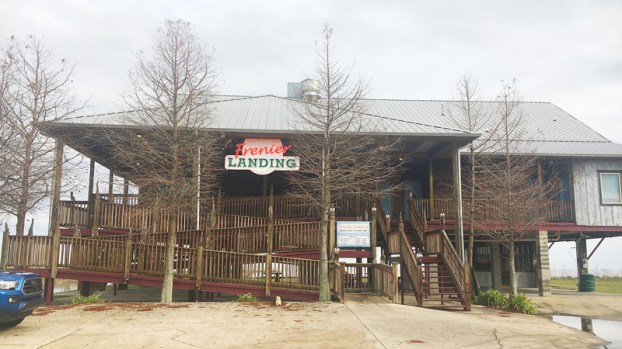 Frenier Landing Restaurant and Oyster Bar is located at 113 Dottie Lane at the edge of Peavine Road in LaPlace.

LAPLACE — Though only a few minutes removed from the heart of LaPlace, each trip to Frenier Landing Restaurant and Oyster Bar feels like a getaway to a lakeside land as beautiful as it is mysterious.

Frenier Landing manager and proprietor Crystal Durand said mouth-watering seafood dishes and an atmosphere reminiscent of an older, slower way of living have made the restaurant a success for the past decade.

On Jan. 29, guests will enjoy $10 off their meal in celebration of Frenier Landing’s 10-year anniversary.

Bacon-wrapped shrimp, chargrilled oysters and stuffed flounder are traditional favorites at the restaurant, located at 113 Dottie Lane at the edge of Peavine Road in LaPlace.

Frenier Landing building owner Murry Daniels stands with long-time employee Justin Springer. Daniels first conceived of the restaurant when the location was little more than a pool of shallow water that needed to be reclaimed.

Guests are treated to live music from local talent from 7 to 10 p.m. every Friday and Saturday and from 2 to 5 p.m. on Sundays.

“Every time you drive onto Peavine Road, it feels like you’re on an adventure,” Durand said. “It’s a destination. Our customers come from Baton Rouge, Thibodaux, Hammond, Gonzales and New Orleans. You feel like you’re on vacation, and the area is historically rich. We bring a lot of people into the community that wouldn’t otherwise come here.”

The first time Daniels saw the property was in the early 2000s, shortly after the opening of “The Snack Shack” in the building that now houses Bec’s at the Lake.

Every table at Frenier Landing comes with an extraordinary view of the lake.

On that clear, sunny day, Daniels looked out at the Lake Pontchartrain horizon and spotted the New Orleans skyline.

It was then he decided to construct a restaurant.

Where Frenier Landing sits was once a pool of shallow water that needed to be reclaimed from the Corps of Engineers.

Persistence made Daniels’ permit the first to be obtained under the Reclamation Act of 1976 and paved the way for others to reclaim land after decades of denial from the Corps.

The permit passed through 12 environmental agencies before construction could begin. To get the go-ahead from the fire marshal, Daniels agreed the building would be fireproof, hardened with sheetrock, concrete and iron under its wood exterior.

“Crystal has made it into what I’d hoped it was going to be,” Daniels said. “I think the heritage is being preserved by this restaurant.”

Frenier Landing keeps up with the latest seafood trends and offers plenty of specials.

The restaurant’s location presents a unique set of challenges, according to Durand. Since the area receives few city services outside of electricity, Frenier Landing utilizes nearby water wells and runs on propane gas.

Road flooding is another hindrance, Durand said, noting the restaurant was forced to close for up to seven weeks throughout 2016.

However, the challenges don’t stop people from flocking to the location and using it as a meeting ground for families celebrating reunions, anniversaries, wedding rehearsals, birthdays, graduations and more.

The downstairs deck is ideal for crawfish boils, and Durand said car clubs and motorcycle clubs often meet at the restaurant.

“It’s always a beautiful day at the lake,” Durand said. “I love seeing families have a good time when they meet up here. We don’t want to change anything because this was the vision.”

RESERVE — The new Girl Scouts Troop 21166, based in Reserve, has exceeded all of troop leader Jessica Smith’s expectations... read more