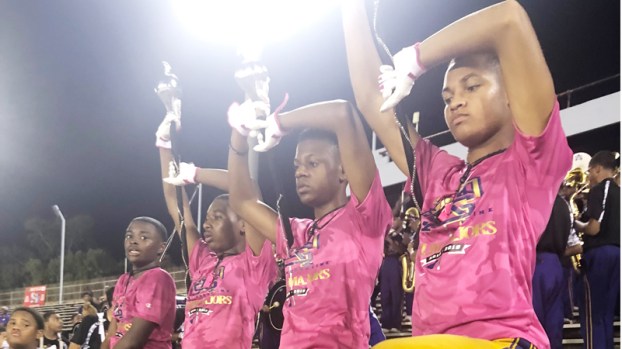 Yvette Perrilloux reached out to me in October.

She had a really cool story. As a St. John the Baptist Parish resident, she thought it was worth knowing that the four drum majors leading St. Augustine High School are from the River Region — two from St. John, two from St. Charles parishes.

St. Augustine High launched one of New Orleans’ most prominent band programs, today dubbed the “Marching 100,” more than 55 years ago.

They are a Big Easy institution and are led by four teenagers who call the River Parishes home.

In order to earn the coveted position, Director of Bands Eddie Williams told me his drum majors must have four years of band experience, be good musicians on their instruments, have great GPAs and avoid all types of infractions or disciplinary actions.

“It’s kind of rough becoming one. It’s definitely not for everyone. Once they get to that position, they are an extension of the staff. They are basically in the highest ranking positions, not in the band, but in the entire school in terms of student (awareness).”

The young men are Kolby Perrilloux, Benard Johnson Jr., Quincy Jones and Kyron Summers and each shared their story with me as part of a feature in the winter edition of River Parishes Magazine, produced by L’OBSERVATEUR and available across St. James, St. John and St. Charles parishes. I am so thankful to Yvette for sharing this story, which allowed us to spotlight some of our over-achieving young people.

The rest of the magazine is chock-full of the best features about our community, compiled in the only lifestyle publication telling these stories.

Some of the other stories include:

• Trista Brazan expected her life would follow a perfect plan, complete with a bustling big city experience. She once joked with her now-husband Kenny that if living in Vacherie was part of his future, they might as well call it quits.

Her story took a dramatic turn a few years ago when her daughter, Claire, while in the womb, was diagnosed with a condition that left the dominant half of her heart severely underdeveloped. Claire also had Turner Syndrome, meaning she was missing one X chromosome in each of her cells.

Through hard work, plenty of love, help of others and prayer, their family and especially “Baby Claire” are forging a future.

That struggle is now part of a new book.

“We’ve heard of a lot of inspirational medical books like ‘Heaven is For Real’ or ‘Miracles From Heaven,’ where there is some kind of divine healing,” Trista said. “‘The Claire Chronicles’ is unique because it’s about turning struggles into strengths when that ultimate gift of healing doesn’t come.”

• One moment, Nick Rose was walking with friends toward a concert in Panama City Beach, soaking up the senior trip fun and the freedom that came with his recent graduation from Riverside Academy.

Tammy and Nick Rose can count on each other.

The next, he was bleeding out on the edge of the sidewalk while his friends held his skull together and frantically dialed 911.

The St. John resident shares his story with River Parishes Magazine readers about the tragic accident, his recovery and plans for the future in the current edition.

• Many young girls and boys dream of becoming a nurse so they can help people feel better. Carolyn Bourgeois Bossier was one of those little girls.

She recently called her decades of local service a career, following in the footsteps of her mother and leading the path for her daughter, also nurses.

To pick up your complimentary copy of River Parishes Magazine, stop by L’OBSERVATEUR’s LaPlace office or call 985-652-9545 to find a distributor near you.

Following a favorable outcome to a 2017 New Year’s fireworks sales enforcement case, a Kenner man has been allowed to... read more