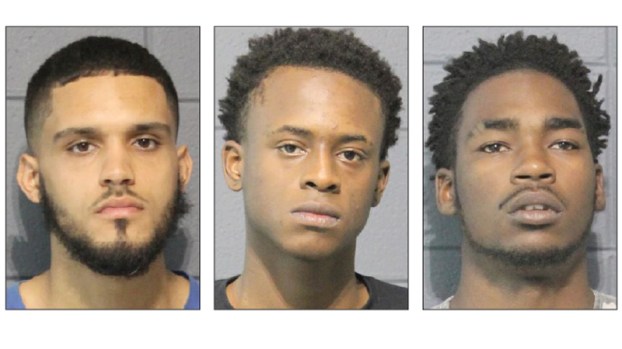 3 arrested after “extensive” police pursuit of stolen ATV throughout LaPlace

LAPLACE — Three local men who apparently wanted to joyride together on a stolen ATV had their bonding experience derailed when they were captured following a vehicle and foot pursuit through LaPlace roads and neighborhoods, police said.

The victim lost sight of the subjects; however, 30 minutes later officers canvassing the area spotted three men on an ATV in the area of West Fifth and Elm streets.

Officers initiated a traffic stop, but the driver refused to stop and led officers on a chase in which he “drove dangerously along roadways on Hemlock Street onto Airline Highway, eventually crashing the ATV into a gate of a business near the 1300 block of Airline Highway,” according to the St. John Parish Sheriff’s Office.

The three men on the ATV fled on foot along the railroad tracks towards West Fifth Street. Officers set up a perimeter and eventually were able to apprehend three suspects between the 300 and 400 blocks of West Fifth Street.

Chilton and Williams were booked with misdemeanor illegal possession of stolen things and are being held in lieu of a $500 bond.

Llewellyn is charged with felony theft between $5,000 and $25,000, reckless operation of a vehicle and operating a vehicle with a suspended license. He is being held in custody in lieu of an $11,000 bond.