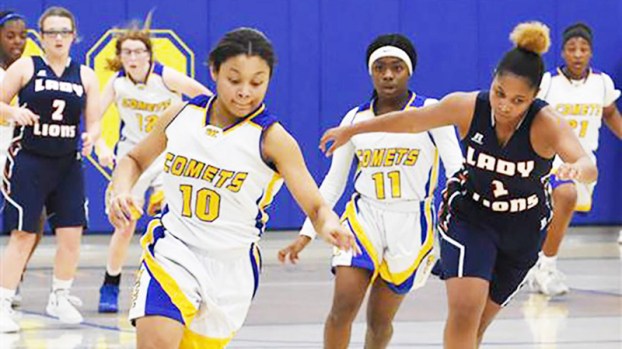 No. 10 Saige Clark chases the ball during week four gameplay this month in Baton Rouge.

LAPLACE — While a 2-8 record might not show it, first-year St. Charles Catholic basketball coach Brandi Adams says her team is full of hardworking girls progressing with each game.

“We started off rough, but I’m seeing glimpses of acceleration in the right direction,” Adams said. “I see people stepping up to take more control with being aggressive and handling the ball. I see people who are usually just taking an outside shot driving to the goal.”

Right-handed players are getting more comfortable attacking the left side, and the team as a whole handles high-pressure situations better than it did initially.

The Lady Comets collected 59-5 and 37-31 wins over Pope John Paul II and Abramson Sci Academy, respectively, but have faced trouble in tournament games.

The Lady Comets share a moment in the locker room before a home game. Despite a 2-8 record, the team is becoming more aggressive with each game.

Several opponents were 4A and 5A programs, though Adams attributes the losses not to school size, but lack of experience.

The strongest teams are packed with girls who have years of AAU and summer league action under their belts, something the Lady Comets are lacking.

With some of the greatest talent from St. Charles coming from eighth and ninth grade athletes stacked up against senior opponents, age is also a factor.

One of the Lady Comets standouts is eighth grader Mya Brown, who at approximately 5’10,” stands a head above most of her classmates.

“Mya is very, very strong in the post,” Adams said.

“To be an eighth grader and already so big and so strong is impressive. She’s definitely one of the top 3 rebounders on the team.”
Freshman Kaitlyn Abair plays with skill beyond her years, according to Adams.

During a recent game against Ascension Christian, Kaitlyn spent well over half the night containing a senior who will almost certainly be recruited onto a college team.

Her one weakness is a tendency to run into foul trouble due to a fearless streak.

“Kaitlyn is extremely aggressive, and I don’t mean that in a bad way,” Adams said.

“She doesn’t mind taking a foul or being physical on the court.”

Shelby in particular is known for hitting 3-pointers, but Adams said no one girl is stepping up more than the others.

“I haven’t had the seniors from the beginning,” Adams said.

“I didn’t get to see the whole progression with them, but I can see they are following instruction and taking the lead, not just on the court but off the court as well.

“They are talking to players on the side and taking that leadership role to make sure the team is a unit.”

Prior to sustaining a serious knee injury during a home game against St. Scholastica, sophomore Alyssa Hooge was a vital player for the Lady Comets.

With a MRI and diagnosis pending, there’s no word on when Alyssa will return to the court.

There’s much work to be done, according to Adams, who set a goal for the team to master “the fundamentals and not the fancy.”

Ball handling and passing are being worked on in practice.

During games, Adams encourages girls to be quick-witted.

“We’re working on making better decisions,” Adams said. “We need to be able to decide whether to take the shot or drive to the goal.”

St. Charles Catholic will compete in a St. Joseph’s Academy tournament next week, followed by a Jan. 2 home game against the Lutcher High Bulldogs.

The Comets overcame a difficult start to 2018, rebounding to put together a six-game winning streak that ended SCC’s season... read more