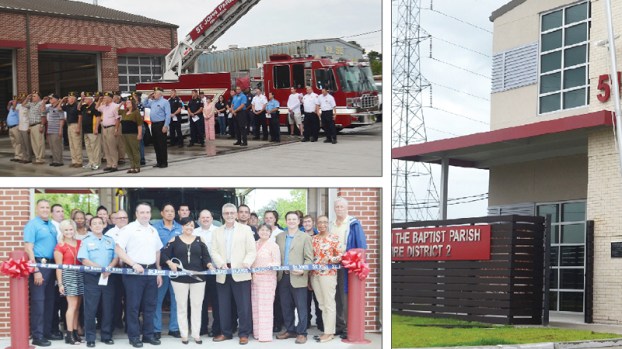 American Legion Post 383 members, top left, helped raise the flag in June, 2017, at the official ribbon cutting, bottom left, of Hemlock Fire Station No. 51 in LaPlace. St. John the Baptist Parish leaders tout the central station for its many amenities and location outside of a flood zone on Hemlock Street.

Who owns the land that our parish fire stations stand on?

It’s not St. John the Baptist Parish Government, according to Councilman Marvin Perrilloux, who wants to see the issue resolved before the current Council exits its term in office following 2019.

“We are all coming out of office and I hate to leave stuff for other administrations or Councils that we didn’t settle on our watch,” Perrilloux said.

The District 4 representative, during the most recent Parish Council meeting, asked Office of Fire Services Chief of Operations Cain Dufrene to expedite the ownership issue and “get where St. John Parish is the duly (recognized) owner of this property. We need to put that on record to say that we own it now.”

It’s a problem that dates back decades to when St. John Parish fire protection was handled by volunteer-led departments.

The transition of tax dollars and land ownership was not handled smoothly as the paid department and career firefighters gained traction as St. John’s leading source of fire protection.

Dufrene told Council members the Parish has secured the legal counsel of Jules A. Carville III, who has been working on the land agreements with three of the four volunteer fire departments.

Dufrene did say there has been no response from the leadership of the LaPlace Volunteer Fire Department concerning the Hemlock station ownership and “other remedies are being developed.”

“(Carville) is going really in depth, making sure the (volunteer) board members that are signing are authorized, making sure we don’t have to come back with anything,” Dufrene said. “It’s an in-depth process that he has to go through. Now that we have agreements from all these, it should move fine.”

The lack of consensus between St. John’s Office of Fire Services and the LaPlace Volunteer Fire Department is more than a speed bump. It could prove to be a sticky sore point that only a judge can determine.

LaPlace Volunteer Fire Department members have told me the Hemlock Street fire station stands on two pieces of land owned by the LVFD that can’t be given to St. John Government.

In an Oct. 30 legal memorandum to the St. John the Baptist Parish Governing Authority, District Attorney Bridget A. Dinvaut said millions of dollars of public funds were spent on fire station construction and renovations where a title search revealed eight fire stations are operated, maintained and situated on land legally titled in the name of another entity.

“These properties are not titled in the name of St. John the Baptist Parish, and the Parish has yet to provide a legally supported ownership interest,” Dinvaut wrote.

In his public comments on the issue this month, Perrilloux said he wanted an update in six months on proper ownership. Creating a solution in that time might be easier said than accomplished.

January will be an exciting time at St. John the Baptist Parish Libraries. In honor of Dr. Martin Luther King... read more