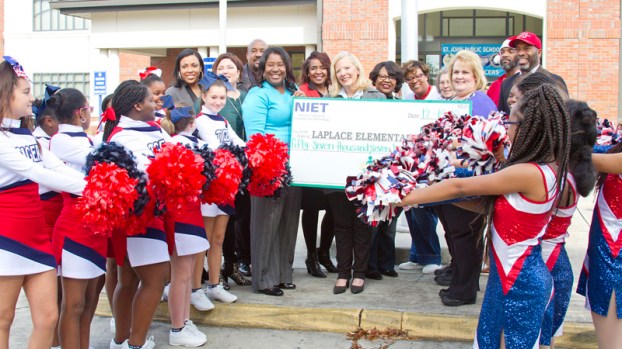 LaPlace Elementary School dance team members and cheerleaders celebrate as the school receives a check for more than $57,000 in bonuses for teachers and principals.

LAPLACE — Superintendent Kevin George felt like Santa Claus this week as he delivered big checks amounting to more than $340,000 in bonuses for St. John the Baptist Parish teachers and principals.

The performance-based compensation was supplied by the National Institute of Excellence in Teaching using a five-year grant that went into affect during the 2017-18 school year.

According to George, awarded funds are performance-based, divided between teachers based upon LEAP scores, observations and school performance scores from 2017-18.

Emily C. Watkins Principal Antoinette Robinet said the $30,818 check delivered to the school Tuesday was “a great surprise” and a wonderful way to honor teachers.

“For many years, they did what they need to do, and it’s awesome that they can now get some compensation,” Robinet said.

LaPlace Elementary School teacher Lacey Crowdus said she’s grateful to be a recipient of the performance compensation, adding she’s never received this type of bonus and isn’t quite sure what to expect.

The check delivered to LaPlace Elementary this week totaled $57,799.

“I’m excited to be rewarded for our hard work,” Crowdus said. “The new processes that we’ve implemented are helping us to become more aware of our students’ needs. The training we have done is helping students and teachers perform at a higher level on both ends.”

“Teachers are going to bust their butts no matter what,” George said. “I don’t believe they are motivated by this extra money. I think it’s more of an award in addition to their salaries. We’re proud to be part of this because it’s good for them to get a reward for all the hard work they are doing.”

“St. John is one of our districts that has implemented (the grant) with fidelity,” Condalary said. “The Superintendent has ensured schools are conducting best practices with kids to get to the goals of the grant.”

Condalary said the grant encourages the use of teacher leaders and allows teachers to meet in clusters to review goals during the school day.

The efforts funded through the grant are collectively known as the Teacher Advancement Program, TAP for short.

“The last part, which we’re seeing today, is an opportunity for teachers and school leaders to earn additional compensation for the work they do with kids, based on the results,” Condalary said. “You have teachers who are most effective with kids earning more compensation than those who might not have the results.”

East St. John High, the school that employs the most teachers, received $71,616 in performance-based compensation Tuesday.