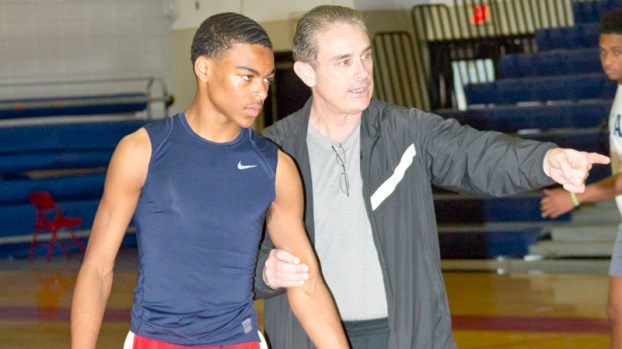 Head coach Timmy Byrd talks to sophomore Gage Larvadain during practice. Larvadain is one of three prominent scorers on the Rebels team.

LAPLACE — For the first time in more than 10 years, the Riverside Academy Rebels are posting a losing record near the end of December.

Known throughout the River Parishes for their speed and vigor, the Rebels have appeared in the Division II basketball semifinals or state championship game almost every year since 2008.

On this week last year, the Rebels were 12-0 and ranked No. 2 in the nation by MaxPreps based on wins and strength of schedule.

“We’re in uncharted territory,” Byrd said. “It’s a little different for us, but we knew early on we were going to have some struggles. We think our inexperience and youth will eventually catch up. We’re not really worried about it right now.”

Byrd said the boys aren’t pressured by high expectations. Experience will build them into a worthy team, and experience is exactly what they’re getting.

Each of those battles ended in a loss, but the Rebels collected wins against Lusher Carter, McDonough #35 and Port Allen, also narrowly missing victory against West Jefferson with a 90-91 finish in overtime.

“We’re playing as hard of a schedule as there is, but our kids are getting better, and we think it’s only a matter of time before they gain the experience to have the success we expect,” Byrd said. “We’re a lot smaller team this year, but we have quickness and we have some skill, so we’re still expecting to have a really good season.”

Byrd said dual sport Rebels stars are still “knocking off the football rust” as they shift their focus to basketball. Seniors Kash Foley and Isaiah Bigham are leading the team along with sophomore Gage Larvadain, who packs a lot of power despite his small stature. Larvadain is the team’s leading scorer, averaging 22 points per game. Foley and Bigham aren’t far off, averaging 20 ppg and 18 ppg, respectively.

Defense has been the shortfall of the season, Byrd said, noting the team is working on inside defensive tactics during practice.

Limiting turnovers during games and staying healthy will give the Rebels a greater shot of advancing through the playoffs.

“The goal is always to win the last game of the season and make it to the state championship,” Byrd said. “Right now, we are focused on getting better every day and being the best we can be. We need to make sure we’re going into the playoffs with a lot of momentum.”

The Rebels play in the St. Thomas More tournament next week, beginning with a Wednesday game against Teurlings Catholic.

If successful, the Rebels will face 5A state champion Walker – Baton Rouge.

The most shocking stat from the entire 2018 high school football season may have been the zero points scored by... read more