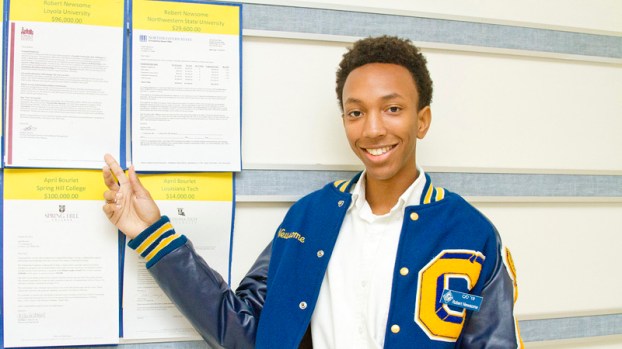 Robert Newsome Jr. points to the $96,000 scholarship offer displayed at SCC that he received from Loyola University.

Upbeat and humorous, Newsome is an accomplished scholar and skilled athlete with a servant’s heart.

He was awarded the gold service award for completing more than 100 service hours during the 2017-18 school year, far exceeding the 15 hours required by his religion class.

Over the past two years, Newsome spent more than 300 hours leading 5-year-olds through Bible study, songs, games and outdoor activities as a counselor for New Wine Christian Fellowship’s summer camp.

When the summer ends, Newsome takes on a Comets Ambassador role and leads prospective students on school tours.

As a member of SCC’s Retreat team, Newsome meets with middle schoolers to teach the importance of a strong relationship with God.

“We make sure they aren’t ashamed of their faith and tell them they should never lose sight of themselves when they get to high school,” Newsome said. “It’s a time when you grow, develop and find out who you are, and Christ should always be a part of that, no matter who you decide to be.”

Newsome said faith is at the crux of his motivation.

Robert Newsome, a senior at St. Charles Catholic, is seeking a career in cyber security. He already has a slew of full tuition scholarship offers to help get him there.

“I want to use the gift God has given me to the best of my ability,” Newsome said. “No matter where life leads me, I want to follow the example Christ left for us.”

His parents, Robert Newsome Sr. and Donna Newsome of LaPlace, also inspire him through their work as a radiologist and an English professor, respectively.

Newsome thoroughly enjoys English and reading. However, his sights are set on a career in cyber security.

Scholarship letters are flying in, among them full tuition offers from Northwestern State and Xavier University and $20,000 per year from Loyola University.

Digital media classes have fostered his interest in computer science. During his time at SCC, Newsome has used JavaScript and HTML to make a mock website and an animated scene.

When the spring rolls around, Newsome spends most afternoons playing soccer and tennis.

Newsome was one of five Comets to compete at the state level in tennis in 2018, where he represented St. Charles Catholic in singles.

In 2017, he was one of only three tennis players to advance to state.

Newsome is equally gifted in the classroom, where he maintains a 3.9 GPA on an honors curriculum.

Though serious in his commitments, Newsome, known to many as Bobby, keeps a lighthearted attitude, according to counselor Suzy Bologna.

“Bobby has an infectious attitude,” Bologna said. “He’s hard-working; happy. He’s so well liked by his teachers and his peers, and he loves to laugh. He’s just joyful, and everyone here knows it. He takes what he does seriously, but he makes it fun.”

Newsome is the vice president of French Club and an active member of National Honor Society and Beta Club.

Through Beta, he volunteers with Special Olympics and the Southeast Louisiana Veterans Home.

LAPLACE — For the first time in more than 10 years, the Riverside Academy Rebels are posting a losing record... read more