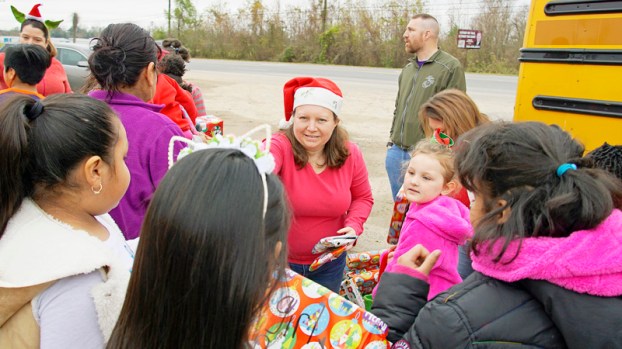 LAPLACE — Children flocked to a yellow school bus parked on the grounds of Shady Nook Mobile Home Park Saturday in LaPlace, racing by foot and by bike to receive Christmas blessings from a group of generous teachers.

One teacher donated handmade jewelry to the families, and parents were blessed with portable phone chargers.

Denia Guidry, above, at right, hands a gift to Alejandra Santamaria as Marbelis Guzman waits her turn. (Photos submitted)

Guidry, who spearheaded the effort, said the group reached more than 50 families in a turnout that exceeded last year’s event.

“The kids and parents were very excited; very grateful,” Guidry said. “Once they saw we were there, they were pouring in from every direction.”

Guidry said the most rewarding part of the outreach was seeing animated expressions on children’s faces as they reached for the wrapped presents.

It all started in August 2017 during a back-to-school meet and greet, when Lake Pontchartrain Elementary teachers traveled by bus to various neighborhoods in LaPlace to hand out school supplies. Living conditions were less than stellar at Shady Nook Mobile Home Park, and Guidry knew in her heart she wanted to help.

“Going there and seeing the area and how they lived just crushed our hearts,” Guidry said. “We wanted to make sure everyone in that neighborhood was able to have a good Christmas last year, and we carried on that tradition this year.”

Thompson recalls visiting Shady Nook during the back-to-school event and finding a sea of mud nearly impossible to walk through. Some of the older children had laid down a ladder to walk over.

During Saturday’s Christmas giveaway, Thompson enjoyed speaking to her current and former students.

“As an educator, I want to make sure my kids know we are there for them,” Thompson said. “There were younger siblings out there and high school kids who I taught maybe five years ago. It was very special seeing some of my older kids and asking how they are doing. I think it’s a great feeling for them to know that we still care about them.”

Guidry said showing compassion through service sets a good example for the children who will become social and active members of their communities.

“We don’t stop at the school door,” Guidry said. “We’re showing we’re not only there to teach them to succeed in their academic lives, but also in their home lives as well.

“It’s showing them that we are building relationships with them.”

Guidry hopes to continue the Christmas event for years to come.

The money will go to provide financial and spiritual assistance to active cancer patients in the River Parishes.

LAPLACE — Each year, First Assembly of God Church in LaPlace gives away between 200 and 300 Christmas toys on... read more