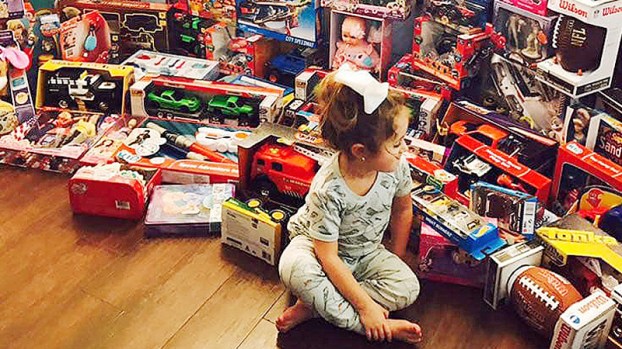 Julianna Smith sits in front of some of the toys collected for First Assembly of God’s toy giveaway, planned Saturday in LaPlace.

LAPLACE — Each year, First Assembly of God Church in LaPlace gives away between 200 and 300 Christmas toys on a first-come, first-serve basis.

Doors are open to any adult with a child present until all toys are gone, according to coordinator Jennifer Spain.

Spain and her mother, Lisbeth Jackson, have spearheaded the event for 11 years with donations from congregation members, Riverside Academy’s Fellowship of Christian Athletes and St. John the Baptist Parish business owners.

There are no other eligibility requirements, Spain said, adding a church is an open door to the community during good times and bad.

Erial Zar, Krysta Zar, Ericka Zar, Erik Zar and Drake Labit are helping volunteer at First Assembly of God Church in LaPlace, where a toy giveaway plans to give out between 200 and 300 Christmas toys.

“Sometimes during this season, people are hurting,” Spain said. “Being able to tell these families Jesus is the reason for the season is probably the most rewarding part. We’re letting them know the church is there to help the community. Being able to offer them not only toys, but also comfort, is a big gift to us that blesses us more.”

Spain said it’s exciting to watch children’s faces glow with excitement as they pick out their toy and extend an appreciative “thank you” to organizers.

“It’s been really successful,” Spain said. “We always have a line of people because anyone can participate. Up through high school, we have something for everyone, such as headphone sets, makeup sets and electronics for the teenage kids.”

Spain said the event has grown over the past decade, with more people willing to donate each year.

Those unable to make it to the event due to disability or other extenuating circumstances can call First Assembly of God at 985-652-2635 and ask to speak to Spain or Jackson.

The annual Christmas toy drive is part of First Assembly of God’s benevolence department, which also heads Thanksgiving meals and gift card giveaways, help for the homeless and assistance in paying bills.

“Sometimes we will help put people in a hotel because they don’t have anywhere else to stay,” Jackson said.

“I don’t think anyone should be in need at any time of the year. I believe in the importance of pulling together as the body of Christ. If we pull together, we can do amazing things for the community.”

Jackson oversees Fellowship of Christian Athletes at Riverside and always involves her students in the toy drive.

“We’re passing the baton down to a new generation by teaching the importance of giving,” Jackson said.

LAPLACE — Bryce Robertson of Reserve knows that, to a child, a bike is so much more than a Christmas... read more