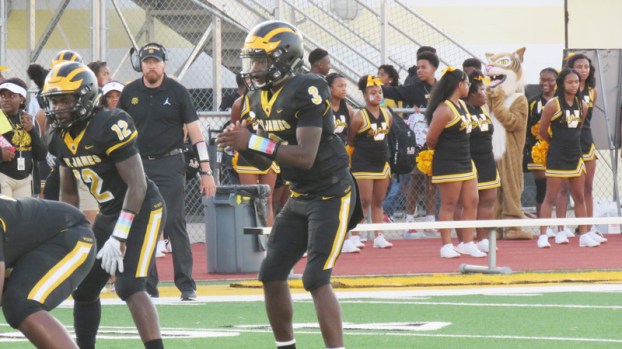 St. James High was dominant in the school’s playoff opener, scoring a 25-0 victory over rival Donaldsonville.

The victory set up, perhaps, the state’s longest road trip as the Wildcats traveled from Vacherie to Springhill to face North Webster in the second round of the playoffs.

The result of that second round playoff game was an upsetting 26-23 defeat.

St. James had the ball with two minutes remaining but was stopped on a fourth-and-13 play, allowing North Webster to run the clock out on the game and the Wildcats’ season. Shamar Smith did his best to keep the Wildcats going, passing for 146 yards and leading three touchdown drives.

It was a tough end to a successful 7-5 run that saw St. James High overcome a youth-heavy roster.

The sun sets in Vacherie behind the Wildcats football field during Week 1.

Everything worked in the beginning as St. James defeated West Bank rival West St. John 43-0 in Vacherie in week one.

“We are in a program where you have to reload quickly,” Valdez said early in the year. “We have a chance to minimize the mistakes and learn from them as fast as possible. At the same time, we need to be consistent in doing the little things such as blocking and tackling.”

“Shamar is a very, very talented kid and a fast guy,” Valdez said. “He started receiving for us (in 2017) before we moved him to quarterback full time.”

Junior receiver Logan Gravois, who played a backup quarterback role last season, established himself outside in 2018 with 23 receptions and 475 yards. He also caught three touchdowns.

Lebeouf was the team’s second leading receiver with 16 receptions and 206 yards.

Momentum was tough to grab for St. James in 2018, as the Wildcats never won more than two in a row or lost consecutive games.

EDGARD — As the only 1A girls basketball team in the New Orleans region, the West St. John Lady Rams... read more